Before you reach for your smartphone and start pawing at the 'Buy' icon, however, you should probably know that this is a Tegra-optimised version of the open-world epic.

As a result, you're going to need a device with some Nvidia power under the hood if you want to be among the first 'droid users to dive into this Pocket Gamer Silver Award-winning adventure. 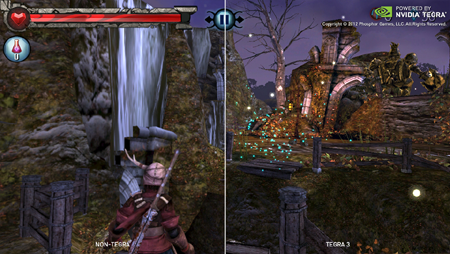 If do happen to own a spangly Tegra 3-powered machine, you'll find yourself staring at the prettiest version of Phosphor Games's creation currently available on any platform (just check out the comparison screenshot above to see what we mean).

As for the gameplay, you are still assuming the role of a blacksmith questing his way around a fantastical world filled with oversized robotic enemies just begging to be discovered (and ultimately dismantled).