The key to success in games with small levels is making the player feel like they have a choice. They might only have three or four moves to make, but it's important to let them experiment with those moves.

That's something that Hooky Crooky clearly understands. There are a small selection of ways to make it through any of the challenges the game throws at you, but any way you pick that gets you to the finish line is acceptable.

There's definitely fun to be had here then, and the little chunks of experimentation mean Hooky Crook has more to offer than your average one-touch arcade title.

You play as a cat burglar who needs to get to a glowing green gem at the end of every level. To get there, you need to swing. You need to swing like your life depends on it, because it basically does.

Along the bottom of every level are pink neon lasers. Touch one of them and you set off the alarm. Set off the alarm and you're going to be heading back to the start of the challenge with no gem.

You move around the levels by swinging from different hook points. These only last for one grab though, and as soon as you let go they're going to disappear. Keep moving forwards or it's the laser grid for you. 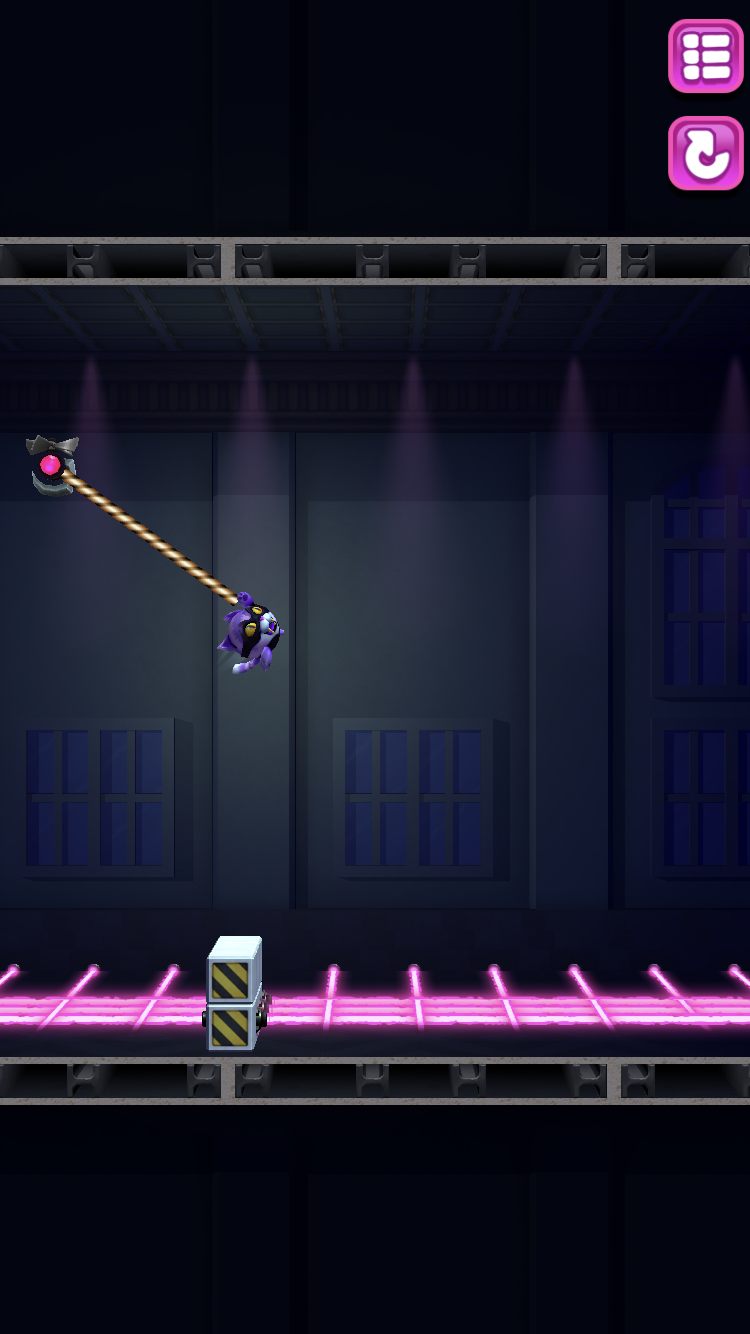 But you don't need to grab all the hooks. In fact, sometimes doing that is going to mean you miss the gem. There are other obstacles to consider as well, like platforms that block your way and bounce pads that send you springing off.

You need to learn to combine these different moves and possibilities to get to the end of a level. Even if it takes you a few tries to get everything down, the challenges are so short that none of them take more than a couple of minutes to finish.

That means that even in a short play session you're going to conquer some pretty stiff challenges. There's a decent feeling of accomplishment even if you're just poking at the game for a handful of minutes.

Things do get a bit repetitive, though, and even the extra elements can't save the game from that. It's the curse of only having one button to press, and it's a difficult one to get past.

It's not the best looking game in the world either, and the rough edges do start to grate a bit, especially if you get uncomfortably jammed by a particularly difficult puzzle.

But for the most part Hooky Crook does things well. It's not going to make you consider the deep questions of the universe, but it'll keep you entertained for a few hours, which is pretty good as well.

There are some nice moments in Hooky Crook, and for the most part they're interesting enough to keep you playing
Next Up :
Hero Emblems II review - "Lovely visuals and music, but match-3 combat lacks strategic depth"