The GameGadget is being marketed as an "iPod for retro games", and that's a neat idea, isn't it?

The notion of an accessible and powerful portable platform that any company can distribute its back catalogue on should have 'retro' fans salivating. And all in a device with full button controls and a cost of less than £60? Wow! Gosh! Egads! Etc!

It's a nice idea, but in practice the GameGadget simply doesn't deliver on its promise, at least not to the level you'd expect from such a bold tagline.

The device is cheap, both in price and build quality. You can grab one of these for less than £60 from the official store, and for a handheld that's an attractive proposition. Less attractive is its design.

Lightweight and ergonomically awkward, a 140x75mm white rectangle is simply not a great way to play these days. The buttons depress into the system too easily, and there's no satisfying clicks to be found.

Considering the game is predominantly made to support Mega Drive games (more on this later) their layout is closer to the Super Nintendo than the Genesis. 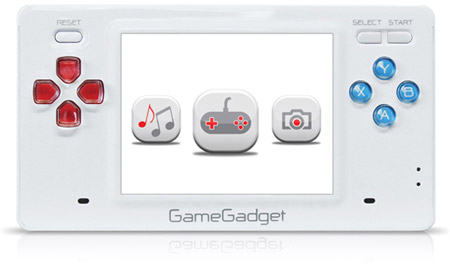 A, B, X and Y plus two tacky and hard to reach shoulder buttons handle input, as well as a D-Pad which fares similarly in the quality stakes. They're responsive enough, but it's not a pleasant experience to use. I also couldn't find a way to remap the buttons to my liking, which smacks of oversight on the company's behalf.

The comparatively large 3.5” LCD screen (running at a resolution of 320x240 pixels) dominates the unit and is absolutely the best thing about the GameGadget. It's vibrant, well-lit and serves the purpose of displaying heritage games amicably.

By contrast, the speakers are poor. It's loud but tinny, and even the primitive sounds of the Mega Drive become distorted when passed through them. Sound levels can only be changed in the appropriate options menu, again showing a lack of thought when creating a device that is meant to be played on the go.

Game sound is clearer when a pair of headphones are inserted, but unfortunately you can hear the electricity coursing through the system, and it's a constant irritation. Plus, if you start the system with them already inserted, it refuses to boot, winding up in a reset cycle.

When you're making a device for an audience that wants to indulge in a little nostalgia, the above elements need to be bang on. If the games being played don't feel, or look, or sound like the real deal then you've missed the point when making a system to replicate these experiences.

The tech specs at the foot of the page look good on paper, but you have to remember that emulation requires a significantly more powerful machine to pull off.

Most of the time the CPU speed isn't a problem: the GameGadget is for running old games that don't (and can't) require 3D acceleration. But even a couple of the Mega Drive games offered as part of the service struggle to run.

Released late in the console's lifespan, Comix Zone pushed the 16-bit SEGA hardware hard, with frame-upon-frame of animation and detailed design. On GameGadget it stutters constantly, the frame rate dropping dramatically, and often.

There's an expectation that comes from consoles: that when you buy something it runs as intended. This simply isn't the case. And woe betide anyone that thinks they can run Yoshi's Island and have a smooth experience.

Because – oh yes – you can absolutely run many SNES games on the device, though this is where we head into that murky, blurry world known as emulation.

You can legitimately purchase Mega Drive games (and currently only Mega Drive games) via the GameGadget's own online service. They're £2.99 each, which is probably about right.

But by simply holding the A button after turning on the device, you enter Sandbox, a mode that will run uncertified, unofficial software. From here you can launch ROMs from all sorts of platforms – including SEGA's – just by downloading them and sticking them onto an SD Card.

Imagine if Nintendo said that you could download games from their Virtual Console service at a few quid a time or, with the press of a button, you could just download them from a torrent site and play them for free. That's the business model at work here. 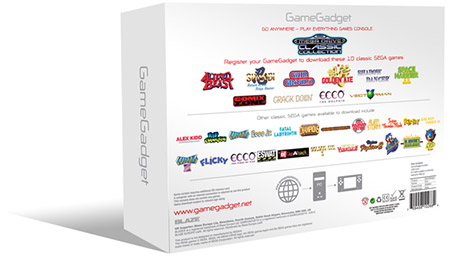 From an economic angle, it's ridiculous. From the perspective of a user (albeit one with dubious morals when it comes to piracy) that's an amazing offer. £59.99 and a PC or Mac with an Internet connection is all you need for, quite literally, tens of thousands of hours of free entertainment.

Of course you could fill the SD Card with movies, music and E-books, all of which are supported, but they don't work nearly as well as on that phone in your pocket. Or you could try out all of that great... homebrew software that... yeah.

So those are the fundamentals you'll most care about, but there are some peripheral aspects that come into play too.

The battery life is a respectable eight-ish hours, and it charges from any USB source, yet there's no custom save state functionality, which makes lengthier titles a pain to play.

There's no true 3D acceleration, so while you can get away with running Doom, Quake is out of the question. No doubt the hackers will squeeze the system to an inch of its life, but anyone thinking of buying one needs to know that games will be the 16-bit and earlier variety.

An iPod for retro games? No. It's cheaply made, lacking in power and easily hackable – the opposite of Apple's design ethos. But for tech tinkerers and those looking for a cheap solution to play all the classics (that they already legally own physical copies of, obviously), it's an interesting, if massively flawed system.

Underpowered even for a few of the games it supposedly supports, the GameGadget isn't the retro gaming solution to end them all
Next Up :
Otaku's Adventure mobile review - "A truly bizarre love triangle"