Half-Life 2 is heading to the Nvidia Shield, if you can believe what a crowbar has to tell you

As the crow bar flies 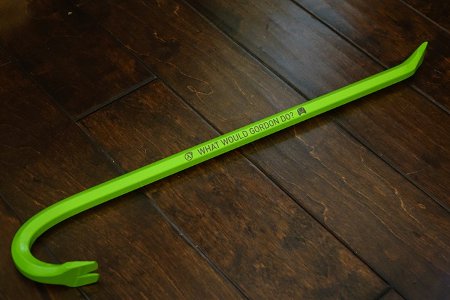 Android Police is reporting that it received a green crowbar in the mail yesterday.

Now, I often get threatening letters and objects posted through my door, but it turns out this is actually some PR tat for an upcoming Nvidia Shield game.

The verdant crow bar is emblazoned with the words 'What would Gordon do?', alongside the logos for Half-Life 2 and the Shield. Even I can do those sums.

The not-really-a-reveal comes after yesterday's announcement of the release date for Portal on Nvidia's clam shell handheld.

Obviously we don't have any more information about the Half-Life 2 release, there is after all only so much you can write on a crowbar, but we'll keep you posted when we find out more.

Half-Life 2 and Portal running smooth on the Nvidia Shield