Standing out in the App Store is becoming more and more difficult.

As new games pile in week on week, coming up with a new idea and, more importantly, getting enough people to download it to turn over a profit is incredibly hard.

Hairy Tales has a neat central premise and a unique look, but it's a little too odd to really get noticed. That's a shame, because if you persevere with it, you'll find an interesting, different, and ultimately entertaining puzzle game.

The game is all about leading a hairy creature through a series of levels. You pick up mushrooms, grab crystals, and bring order and light back to a fantasy world that's been struck by a gooey misfortune.

Leading your little troll through the 3D world isn't as simple as it sounds, though. Your Hairy will only walk in straight lines, so it's up to you to manipulate the ground under his feet in such a way that he makes it to the goal unscathed.

The Hairy Tales world is made up of hexagonal blocks, which can be twisted around, or moved to create a path for your hirsute hero to make his way across.

As you progress through the game, you'll have to contend with fences, direction-changing arrows, and vile creatures that will kill you with a single touch.

Once you think you're set, tap on the hairy man and he'll move forwards. There's plenty of ingenuity on show in the level design, and quite often you'll need to think fast to ensure you don't plummet to an untimely death in the abyss that surrounds each of the puzzles.

Hairy Tales gets fiendishly difficult pretty quickly, so don't let its twee exterior fool you. Traversing a level requires a good deal of thought, and it only takes the slightest mistake to send you back to the start.

That toughness, coupled with the game's bizarre setup, is likely to put some people off.

Puzzle fans, and anyone who wants to try something different, on the other hand, are going to find an awful lot to enjoy in this strange game. 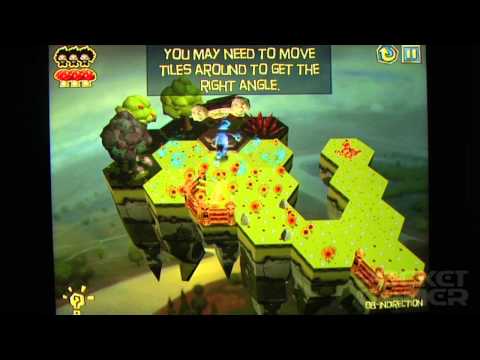 Tough, entertaining, and slightly mad, Hairy Tales is a decent puzzler that definitely deserves some attention
Next Up :
Streets of Rage 4 mobile review - "Worth the twenty-seven-year wait"