FunPlus has announced the epic festivities in store for fans of Guns of Glory as the free-to-play strategy game on mobile celebrates five years of service. Players can expect plenty of exciting in-game campaigns along with bountiful rewards, the new Twilight League and an epic treasure island adventure.

During the fifth anniversary festivities of Guns of Glory, players can look forward to the Treasure Island Adventure from September 19th to October 16th. Lucky Orbs are up for grabs in the Pirate Super Lotto that will give away goodies during the Lucky Draw. The Treasure Hunt Competition, on the other hand, lets players earn Lost Treasures that they can submit to the event page to score points and stage rewards. Finally, the Surprise Crab Chest will reward players who find treasure chest-shaped crabs with special prizes as well.

As for the new Twilight League Championship Tournament, the mightiest Alliances can duke it out in a contest of 256 teams across varying brackets until the Champion is crowned. 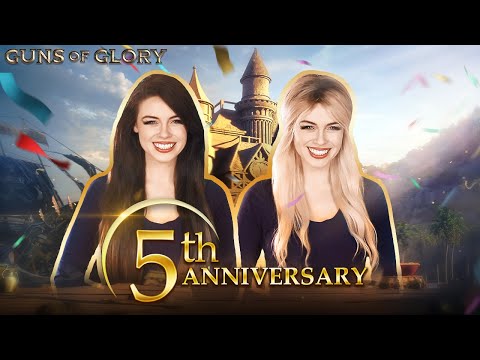 “We’re impressed and grateful for the great performance of Guns of Glory over the past five years, as well as its growing community,” says Chris Petrovic, Chief Business Officer at FunPlus. “We’re close to celebrating our 100M downloads milestone, which reinforces the commitment of our KingsGroup studio to keep delivering an incredible gaming experience within one of the greatest franchises in the mobile strategy genre.”

If you're eager to join in on all the fun, you can now download Guns of Glory on the iOS App Store and on the Google Play Store for Android devices. It's a free-to-play game with in-app purchases. You can also visit the official website for more info, join the community of followers over on the official Twitter page to stay updated on all the latest developments, or have a look at the embedded clip above to get a feel of the updates in store for you.

Next Up :
Gubbins is a quirky word game that's "Solitaire meets Scrabble", coming to iOS in 2023