A sandbox isn't a sandbox if you can't "Be anyone! Create anything!", and in Growtopia, the game's slogan rings truer than ever. Ubisoft's free-to-play 2D MMO offers limitless customization and a world of possibilities across different locales - and in its massive UbiWeek event, players will be able to explore all the more as a host of Ubisoft IPs make their way to the Growtopia universe.

If you're keen on discovering just how you can combine endless creativity with some raving Rabbids or Florence's most infamous assassin, we've got the lowdown on what Growtopia has in store for you from January 24th to 31st . 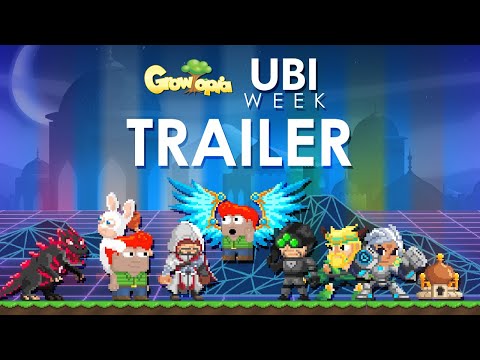 Be anyone and create anything in Growtopia

Explore millions of virtual worlds with family and friends in Growtopia's free-to-play platform. Here, you can build the life you've always dreamed of, from a lightsaber-wielding knight to a dragon master queen. You can also design skyscrapers, recreate movie scenes, or even blast off into space - whatever floats your boat, really.

Players can also expect to engage in thousands of mini-games generated by like-minded and brilliant individuals in the Growtopia community. Items can be crafted and traded, while unique new pixel worlds can be created and shared with online buddies for more adventures.

Immortals Fenyx Rising and Splinter Cell in one epic crossover

For seven action-packed days, players can experience seven Ubisoft franchises in the sandbox title beginning January 24th. Celebrate UbiWeek madness by equipping Immortals Fenyx Rising's iconic Wings of Daidalos, which renders gorgeous Feathered Wings on your avatar along with a trail of sparkles as you move.

Meanwhile, Splinter Cell fans can enjoy transforming into Sam Fisher who joins the game with his trademark Stealth Suit and Night Vision Goggles.

To lend a suitably covert feel to his insertion into the Growtopia universe, the iconic operative will have unique animations for walking, jumping, falling, and punching, and keen eared Splinter Cell fans will also be able to hear the iconic sound of the Sam Fisher’s Night Vision Goggles turning on playing in the background.

On top of those two universes, the Ezio - Chest Item from Assassin's Creed lets players enjoy the game as Ezio with similar skills and traits as Splinter Cell's Sam Fisher. The Rabbids - Riding Rabbid, on the other hand, generates a rabbid with a plunger on the player's back when equipped. This lets players unleash a unique kind of attack when punching, as the Rabbid fires plungers at their target.

Far Cry 3 Blood Dragon fans can enjoy a Pet Blood Dragon that follows the player around. Punching activates the pet's own attack that shoots lasers out of its eyes. Similar to the original game, the dragon's bio-luminescent colors also shift depending on its state, along with its animation. In particular, it shines Teal Green while idle, Yellow while moving and Red while punching.

To cap off the seven IPs for UbiWeek, the Prince of Persia Weather Machine renders the background to mimic the environment of Sands of Time. There are also plenty of Block Items that add to the look and feel of this unique aesthetic, which includes Cave Columns, Granite Columns, Death Spikes, Cave Torches, Pyramid Spikes, Palace Platforms, Diamond Castle Turrets, and more.

Finally, for Brawhalla, players can transform into Bödvar along with specific animations on equipping, moving, and punching which, in keeping with Brawlhalla’s fighting style, can be utilised when falling or jumping. The same is true for transforming into Val, with two silver and dark blue gauntlets generated upon equipping.

The possibilities are truly endless with Growtopia - now more than ever during UbiWeek. If you're keen on joining all the fun, you can download Growtopia on the iOS App Store or on the Google Play Store for Android devices. It's a free-to-play game with in-app purchases.

How to build the best world possible in Growtopia - hints, tips, and tricks