It's a nice song. It's got a catchy little retro beat, with a drum roll undercurrent and a pleasant beep-boop chorus. But it never changes, it never stops, and it never leaves you.

Which is all very similar to the game itself. It's got a clever central idea - you're a duck who can flip gravity at will. Tap a button and you can jump from the ground to the ceiling and back again.

And if you fall into a swirling gravity well, you'll spin 90 degrees and land on the wall. Now, you'll use the other half of the D-pad, and the 'gravity flip' button bounces you between walls.

It's clever, and it's fun, and the sideways spin means it never feels like a straight rip-off of indie masterpiece VVVVVV.

But, like the background song, that same basic idea is trotted out over and over again, in more than 100 nearly identical levels.

Sure, you'll come across some enemies. You'll dodge swinging pendulums, laser beams, arrows, frogs, and spikes. And the game gradually gets harder - but not by much.

The whole thing feels safe, sedate, and monotonous. Sure, it's never going to take you to the tormented, infuriating, brain-bruising lows of VVVVVV. But you'll never get the dizzying, orgasmic, air-punching highs, either.

It looks nice, at least. League of Evil duo WoblyWare and Ravenous Games have mastered that chunky pixel-art graphical style that's both handsome and functional. You can't fault the presentation.

But it's just not brave or bold enough to stand out from the pack. Gravity Duck is a perfectly playable little slice of gravity-flipping, platforming action, but there are plenty of those on the App Store already. 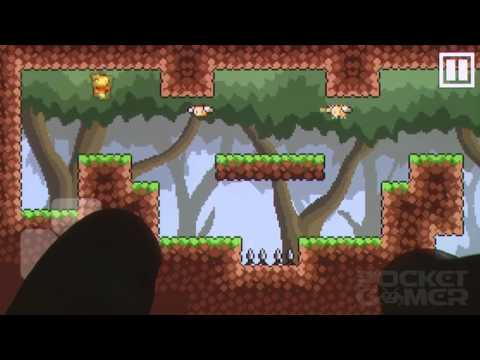 Gravity Duck is cute and clever, but never surprises and rarely poses a challenge. All in all, it's a bit of a lame duck
Next Up :
Catalyst Black review - "Gorgeous visuals, smooth gameplay and fun-filled fights"

What's that on the ceiling? Is it a bird? Is it a plane? Yes AND no