Everything you need to know about the latest alien shooter

Action Square are so new to the scene that, well, Gigantic X is their first game. But, what a debut? It's an explosive game which easily rivals the big budget games of the big players, and not just that it's damn good.

Gigantic X is similar to a twin-stick shooter. You get an isometric perspective, a bunch of guns, and a whole bunch of enemies. But the game can get seriously tough at times, and as such, you need some expert tips to help you through. Well, I don't know about experts, but you've got me.

In this guide we're going to take you through what Gigantic X is and how to play it, because if you want a quickfire shooter to blast through in your spare time, this might be the next one for you to play…

How to play Gigantic X 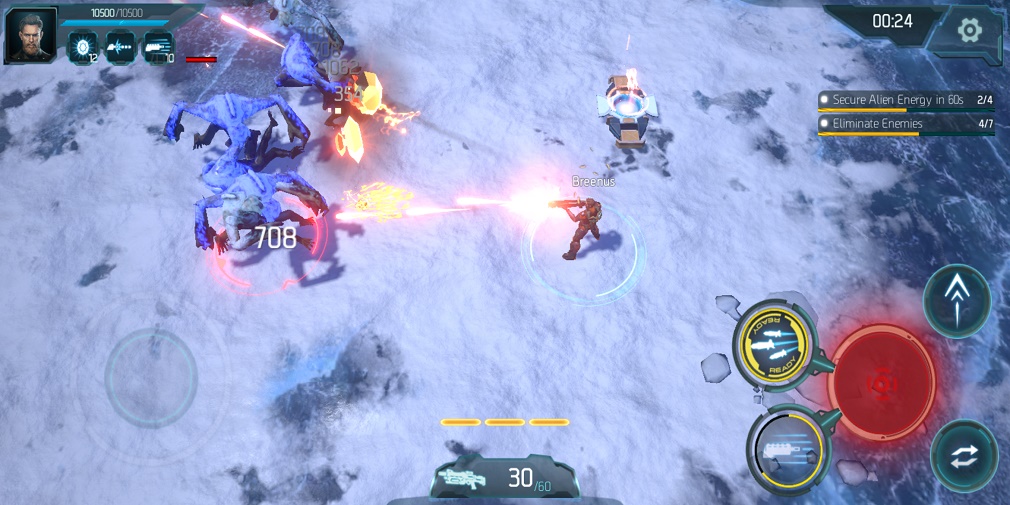 It's pretty simple, as most twin-stick shooters are. You have a digital control stick for movement, and a selection of buttons on the right side of the screen for shooting down your enemies.

Luckily it's not as simple as just blasting away, and you have a small variety of shooting methods to choose from. A barrage blast, and enhanced bullets are just two options. Though the other actions you have access to change entirely depending on your character and weapon type. Despite that, your basic strategies will mostly remain the same. Do damage, avoid damage.

Save up your big screen-wiping attacks for when you're getting overwhelmed or when a boss shows up, but use your other moves freely and often.

The dodge in this game is great. Dodge everything. Dodge often. It's wonderful.

You can actually get more charges or power from perfect dodges, encouraging you to stray close to danger, though how worthwhile that is will be up to you.

While in a dodge you are invincible, and can dodge through lasers and other ordinarily dangerous attacks.

There is a variety of mission types to jump in to once you've gotten past the training section of the game. Assaults, exploration, droid awakenings, defense missions, and more.

Though they all have slightly different objectives, the actions you perform will often be the same. Rock up, shoot down enemies, and collect anything they drop.

For defenses and droid missions you will have to mosey on over to certain locations and wait around for a bar to fill, but it's nothing you won't be used to already.

When you're outside of missions, make sure to check your packages for any gifts or items you may have earned, and then make sure you are equipped with all the best loot.

You will equip two kinds of weapons, and a bunch of other items, including keepsakes which make your mercenaries feel at home, I suppose. Other than that, you've got the expected selection of armour and guns.

If you don't have any decent weapons to equip or are missing decent armour pieces, save up your materials and make a note to craft them later. A fully equipped mercenary is important and will save your ass.