App Army Assemble: Ghosts and Apples - "Does this spooky puzzler bring anything new to the match-3 sub-genre?"

Ghosts and Apples is a recently released puzzler where the aim is to work your way through several levels to free your soul from a puppet. There are over 70 levels in total alongside plenty of secret rooms to discover. We handed the game over to our App Army to see if they could successfully free their soul from the marionette.

This is like a match 3 with a unique twist. You collect coloured ghosts and stack them up on either side of the screen. At first, it’s relatively simple, but as you progress in levels it gets more fast-paced and fun. It’s a simple game but very enjoyable. I enjoyed the burton like the art style. Everything has a macabre vibe to it that sets it apart.

I enjoy a good match-three game and this one really caught my attention. The gameplay is simple to follow and fast-paced enough to keep me interested, although, as with many match-three games, I found it better in small doses. The graphics are dark and ghoulish and the music suits but is repetitive. The game involves catching different coloured balloons into tubes while matching three of the same colour. As expected the levels become more difficult as the game progresses, giving a challenging edge. On the whole, it’s a good game, perfect for killing time, but can be a little repetitive. Overall though, for the price, it’s a ‘yes’ from me.

I am not completely aware of any previous knowledge about the relationship between ghosts and apples. Not read, or seen it in any movie. Nevertheless here comes a game combining the two into a match-3-puzzler. Not sure that my understanding of the relationship between the dead, and fruit has improved.
Gameplay is quite simple, you get four touch bubbles where ghosts appear. Depending on which bubble you touch the ghosts stack up at the sides.

Depending on what corner you touch the ghosts gather from the top, or bottoms and once you get three they explode in a hail of points. If you stack them in the incorrect order, you ca?t clear them all before time runs out. And yes, that means you get fewer apples. While I understand the mechanics of the game, and it has quite a sparkly nice presentation it failed to grab me. Levels are quite short, and I did?t really get either the Tetris-like want to master and survive or the Candy Crush-like urge to improve my score to beat a level. Polished game that lacks that oomph! needed to grab me.

Ghosts and Apples is a very simplistic three-match puzzler where you have to catch ghosts of the same colour and pop them and you will get apples for that. It looks very easy but gets very hectic once there 3 or 5 ghosts at the same time on the screen and your reaction time will get you a far better score. So there are many levels, some have to be unlocked with a key and that can be purchased from a shopkeeper that sells the key for 'X' amount of apples. There are secret rooms in the game and it has a nice progression system. The art style is very good and I love the game. The spookiness and horror type atmosphere is a good feel for the game. I will recommend this to anyone who enjoys 10-15 mins small games.

Ghost and Apples is the kind of game that tastes to play with its stylized and well-made graphics, with sound effects that make you want to listen more and more. The game style is very dynamic and with simple, intuitive and easy-to-handle controls. Playing Ghost makes your time pass much more pleasurable, everything in the game was made for you to get addicted and surely succeeded. Game well done in every way. 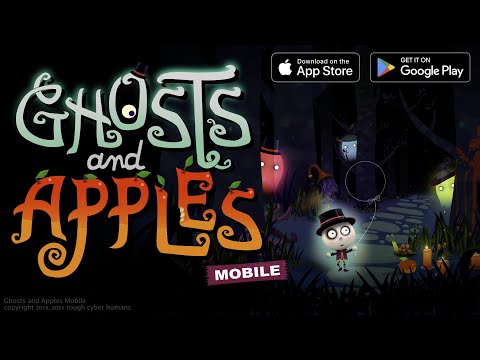 This is a cute variation on match-three games with an engaging art style that brings to mind (very strongly) Tim Burton movies, especially The Nightmare Before Christmas. The music was enjoyable and appropriate and I had no trouble with controls once I got used to them. The speed seems to ramp up fairly quickly so I found I needed a bit of stubbornness to keep going. I have to say that while I enjoyed the art style and music and creative spin on the genre, the story isn’t what drew me in. The look was, and the gameplay kept me coming back. If you like match threes but you’re wanting to see an inventive take on them (like I am), this might be worth your time and your 1.99.

Ghosts and Apples is a cute cartoonish match-3 game that would be perfect for light Halloween fun, as it offers a nice twist to the matching. Coloured ghosts are automatically attracted to a magical balloon that you carry with you, and one by one, you must toss each into its own coloured area on the screen. When you collect three of a single colour together, they burst into apples, the in-game currency that allows you to unlock additional levels.

Unfortunately, there's one major problem when playing this game on a phone with a camera notch--the access levels button is hidden underneath the notch, completely inaccessible. The game screen doesn’t rotate either, and that simple change would’ve allowed me to access the entire game but the developers didn’t implement that function.

There’s also a bug when playing on a Pixel 4a5g as I was unable to advance past the first level! I checked an online gameplay walkthrough, and once you complete the first level the floor is supposed to open up, sucking you into the next level. That doesn’t happen. Jack simply stands there and walks back and forth across the screen, waiting for something to happen that never comes. Cute game but unplayable on an Android 12, Google Pixel 4a5g. Not recommended without some major fixes.

Next Up :
Phantom Blade: Executioners release date and the rest you need to know

Ghosts and Apples lets you turn ghosts into apples to get your soul back, out now on iOS and Android