Tin Man Games has released another digital gamebook on the App Store.

It's called Gary Chalk's Gun Dogs and it features illustrations by Chalk, the legendary artist famed for his work on the Lone Wolf series.

As you might expect, the game is powered by Tin Man's brilliant gamebook engine. In the game itself, you play as one of the Gun Dogs.

They're death row prisoners who are fitted with a magical collar and sent on suicide missions. Disobey, and the collar will choke you.

During this Jamie Wallis-penned story, you'll roll digital dice, make tough decisions, and make your way through the Empire of the Five Cities wielding a three-barrelled pistol. As you do. 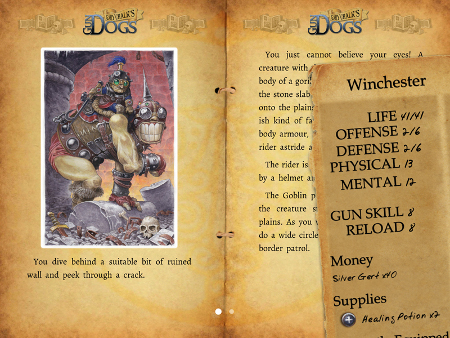 "Jamie has done a brilliant job of turning my vague ideas for the setting into a really exciting gamebook," Chalk said in a press release.

"I presented him with a map of the area that was largely empty; a story that consisted solely of a beginning and an end; and a rather confused collection of characters.

"He has woven all of this into the text of an epic wilderness adventure the size of a continent."

The game is only available for that price for a limited time, though, so you'd best grab it sharpish.