Set in a time of opulence and grace, Mechanist’s Game of Sultans lets you rule to your liking in the Golden Age of the Ottoman Empire. You can not only wage epic warfare across the battlefield as the majestic Sultan or Sultanah, but you can also experience the rich, intricate relationships of court life. Just what else is in store for players in this free-to-play empire sim RPG?

Join the festivities of the 3rd anniversary

Game of Sultans is celebrating its 3rd anniversary, inviting all players to light a candle and make a wish (plus share some delicious birthday cake). As you decorate the cake, you can also leave a message for friends and allies to celebrate your milestones together.

Speaking of milestones, you can take a walk down memory lane through special tomes that showcase each player’s awe-inspiring history throughout the game. The “Empire Tome” will be a look back at the most iconic moments detailing your political achievements and military victories - plus a romantic relationship or two.

Brutal conquests and political intrigue aside, you can unwind with adorable doggos and furry felines at the new pet pen. The new pet system lets every Sultan and Sultanah own their own adorable pets, feeding them and nurturing them until they grow up to be your most loyal companion. Pets can not only hunt for you, but you can also send them off to explore while you’re away.

In line with the 3rd-anniversary celebrations, feline celebrity Michael from Aaron’s Animals on YouTube joins in on the birthday bonanza. If you can spot this furball lurking around the corner in the palace, you’ll score tons of rewards and fun decors - so be sure to stay updated on the clues left by your Viziers. Who says these warlords are only good for war councils? 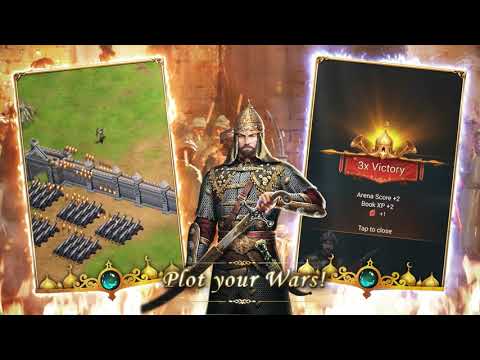 Dabble in a little vanity at your court

Appearances may not be everything, but when you’re the revered Sultan or Sultanah that everyone looks up to, you’ll have to be at your best no matter where you go. Customize your outfits and go all-out, decked to the nines with the most meticulous costumes. After all, a little vanity never hurt anyone.

In the game’s version 3.2 update, the Serendipity Salon also adds the ancient art of nail decoration during a special in-game event. After a tiring day of exercising your reign over your lands, why not treat your companions to a fabulous manicure with stunning nail art in exchange for exclusive rewards?

Grow the greatest Empire in the world

Ruling an Empire isn’t all sunshine and butterflies - you’ll have to strategize every step you make, as well as determine how your legacy can continue long after you’re gone from this world. To keep your Empire the powerhouse that it is today, you’ll have to guide your heirs on their path to greatness.

Of course, the worthiest heirs come from the most royal line of blood, so building alliances isn’t just for turning the tide of battle in your favor during wartime. Your strongest alliances will also give birth to the noblest marriages, so be sure to win the hearts of your consorts (or woo your courtesans and assemble your harem) to build dynasties from your heirs.

Enjoying Game of Sultans to the fullest doesn’t mean scaling a paywall - you can complete Daily Quests to earn various currencies, gain VIP experience, and be the mightiest Empire in all the land. If you’re ready to give it a go, you can download the game on both iOS and Android today!

What's A Preferred Partner Feature?
From time to time Steel Media offers companies and organisations the opportunity to partner with us on specially commissioned articles on subjects we think are of interest to our readers. For more information about how we work with commercial partners, please read our Sponsorship Editorial Independence Policy.
If you're interested in becoming a Preferred Partner please click here.
Next Up :
Identity V - Best hunters