A few weeks ago, we posted a review of Turtle Beach's Recon Cloud controller. It's a great pad, but it did nothing to change my mind that the best type of controller for mobile is the Switch-style setup. Fortunately for me and others who share that opinion, Turtle Beach has another mobile controller with this configuration. It's called the Atom, and it's pretty good, for the most part.

There are several colour variants available for the Atom; Black/Yellow, Black/Teal, and Red/Black, with the first colour being the more prominent. My review sample was the Black/Teal model, and it looks great and, for my money, is the best option. It looks sleek and simple while maintaining a bit of personality you might lose if the controller was entirely black.

The Turtle Beach Atom is more than a pretty face, though. It boasts console-sized buttons, including the analogue sticks. So if you didn't get along with the Razer Kishi's smaller thumb-sticks, the Atom might be worth checking out. However, while having full-sized buttons makes for a more familiar experience, it does make for a more cramped setup. This is particularly noticeable on the right-hand side where the analogue sticks feel like it's directly underneath the face buttons.

It's ultimately a minor quibble, though. The positioning doesn't lead to any misclicks and isn't uncomfortable. It simply feels a little off. Beyond that, the buttons on the Turtle Beach Atom are almost perfect. The face buttons have a pleasant travel distance, and the triggers are nicely weighted. My only minor gripe is the D-Pad feels somewhat aimless when you press it. It's not Xbox 360 controller awful, but it's not the greatest either. 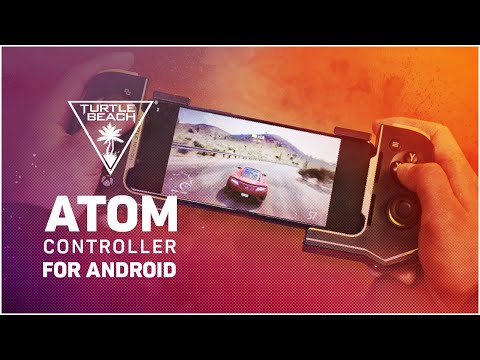 Overall, the button setup is definitely console controller quality, and if you've used an Xbox controller previously, you will feel at home with the Turtle Beach Atom. However, although I have few complaints about the pad's buttons, a few issues pop up when you look elsewhere. And in most cases, these problems are found in places where Turtle Beach has tried to stand out from the competition.

The two premier controllers in the mobile gaming realm are the Backbone One and the Razer Kishi V2. In both cases, they connect to your phone through the charging port. Meanwhile, the Atom has opted for Bluetooth. That means that unlike the Razer Kishi V2 and Backbone One, you can't charge your phone while gaming. It might not be a deal-breaker for some, but it does mean your gaming sessions might occasionally come to a premature end.

Fun design comes at a cost

The other issue lies in the admittedly cute design. Most mobile controllers going for the Nintendo Switch look include a bridge that holds your phone in place and connects the two sides of the pad. With the Atom, Turtle Beach decided to try something different. Instead, their Bluetooth controller comes in two pieces that interlock with one another for easy portability. It's a neat idea and makes it ideal for throwing in a bag without taking up too much space. Unfortunately, the execution isn't perfect.

The problem is it doesn't make your phone feel completely secure. While testing the controller, my phone would sometimes slip, and I would need to readjust it. In truth, it's unlikely the phone would ever fall out unless you fiercely shook your hands in a rage. Still, your controller and phone moving around while playing games is far from ideal. When you're paying £89.99 any movement is too much.

The Turtle Beach Atom is a controller that does plenty right. The buttons are excellent, and if you're not bothered about being able to charge your phone while you game, the battery life is stellar. However, the feeling of your phone not being totally secured caused by Turtle Beach trying something different with the design serves as a reminder that sometimes the Status Quo exists for a good reason.
Next Up :
Reigns: Three Kingdoms review - "Swiping to unite China again and again"