It's amazing how the twin pillars of archaic game Rogue - random levels and permanent death - managed to inspire a whole genre.

In the intervening years fans and developers have tinkered with, innovated upon, and polished up the formula in search of the ideal balance of skill and chance, difficulty and narrative progress.

And in FTL, they've come the closest to perfection so far.

The game sees you piloting a starship through various sectors, trying to deliver a critical message to high command before joining the final showdown yourself.

Along the way you'll upgrade your ship, acquire and train crew, fight numerous interstellar battles, and uncover the secrets of a surprisingly rich and complex universe.

At least, you will if you can learn to survive more than a few jumps. 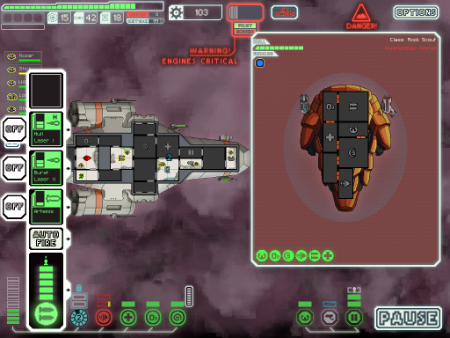 "Engines critical" is rarely a good thing. Especially in red

It's not an easy game. There's a button on the start screen comfortingly labelled "easy" but it is most assuredly a lie. The "hard" version doesn't even bear thinking about.

You're being pursued across outer space by an entire fleet of enormous warships, and it's critical that you stay one step ahead of them at all costs. As you flee desperately you'll run into pirates, vicious aliens like Rocks and Mantis, infestations of interstellar spiders, and worse.

Yet while some of the encounters resolve into simple yes/no choices where you can have little idea what the "correct" pick is, most of the game feels entirely fair. The bulk of play revolves around pause-able real-time strategy encounters where you must carefully manage systems, crews, and weapons across mini-maps of the opposing ships.

So when your ship and crew are reduced to little more than cosmic dust, it's usually because you failed to refuel, failed to check for fires, failed to co-ordinate your boarding parties with your weapon salvoes properly. 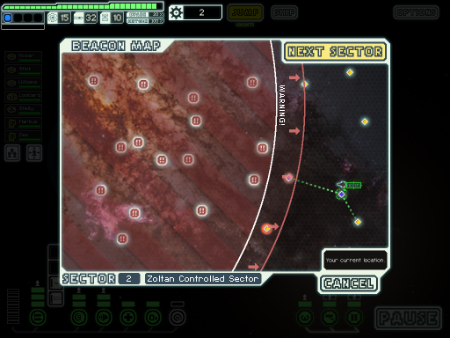 So you want to try again. And again. And again. FTL is addictive beyond belief. It's a game that works its way under your eyelids and sits imprinted on your pupils like burning plasma as you attempt to sleep. It's still there in the morning when you rise, bleary eyed, trying desperately to think about something else and failing.

What's really astonishing about FTL is the synergy, how all the little systems in the game work together to offer a level of challenge and strategy far greater than this deceptively simple game appears to have.

The issue for this mobile version of the game was always going to be replicating the sublime ease with which the interface of the PC version allowed you to co-ordinate these factors without being overwhelmed.

A lot of clever design has gone into the port - little touches like swiping up and down to change the power levels of various systems, and automatically pausing when you target weapons.

But it's not quite enough. It's distressingly easy to lose track of some important component in the middle of a critical battle, and be reduced to your constituent atoms before you know it. Pausing a lot helps, but it reduces some of the tension that feels so right and proper to an adrenaline-fuelled firefight, and that's a shame. 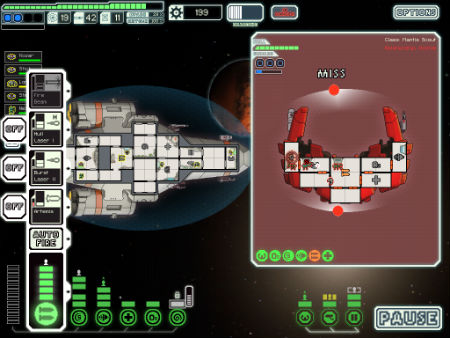 Ships filled with slavering insectoids are rarely a good thing. Especially in red

But, slowly, you'll learn to survive in a hostile universe. You'll learn how to target missiles on critical systems, how to save up laser broadsides to bypass shields, how to manage oxygen levels to control fires and suffocate enemy crew. You'll understand just how many viable tactical and strategic options there are to experiment with.

And as the game gradually opens up before you, you'll see how many science fiction tropes have been squeezed into the game like stars in the glittering galaxy.

FTL is a sandbox for reliving moments from your favourite books and shows, the interplay between the Choose Your Own Adventure text elements and the careful strategy bringing the coldest reaches of outer space thrillingly alive in the warmth of your palm.

An incredibly rich, challenging and varied sci-fi experience that seamlessly and creatively blends genres into a brilliant whole
Next Up :
Netflix Oxenfree review - "Reading the signals of a thriller story"