There’s that classic icebreaker question: who’d win in a fight between (insert two historical figures from wildly different time periods)? Webzen’s latest offering, First Hero, is a little like that - but in the form of a multiplayer real-time strategy game. A gaggle of famous faces from the tomes of history and folklore are available for you to collect, upgrade and pit against each other in battle. The game has just launched wordlwide (except for in China, Japan and the Middle East) on both iOS and Android. 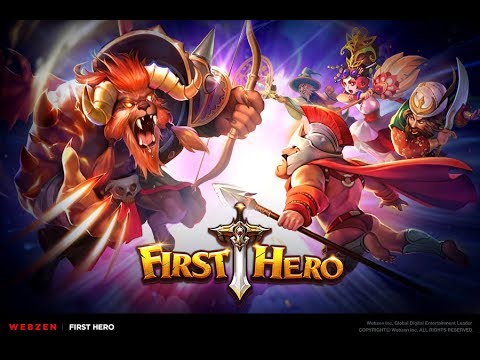 There are more than 50 heroes available to summon, inspired by figures from all over the place — from medieval Europe to the Far East — and this line-up will likely grow with future updates. Your heroes are more than just an eclectic mix of faces; they each bring a unique skill to the battlefield. They won’t be fighting alone, either, but instead will lead your battalions of troops into PvE and PvP skirmishes. Your troops and heroes can be enhanced using the equipment you gather during gameplay, allowing you to gain the edge over your opponents through resource gathering and investing.

First Hero also has a city-building element, where developing your base is crucial to growing your power. This is where the valuable resources you glean from your victories will be spent and is an essential part of recouping any troops you’ve lost in battle.

There are a few different gameplay modes in First Hero to play with. There’s the PvP Arena for when you’re feeling particularly competitive; the Alliance Domain Conquests and Expedition for co-operative battles, Buer’s Elite Soldiersfor hunting down monstrous bosses and Adventure Mode for single-player fun. Plus, as per Webzen’s usual MO, there are plenty of log-in rewards, events and bonuses to tempt you back again and again.

Download First Hero for free right now from the App Store and Google Play and start collecting your heroes.

Build your own army of legendary fighters in First Hero, coming soon