Fighting Fantasy: Island of the Lizard King is now available for iPad and iPhone

If you like digitally rolling dice, fighting over-sized lizards, and defeating the forces of dark magic, then Tin Man Games's fourth digital Fighting Fantasy gamebook adaptation, Island of the Lizard King, is going to be your perfect Christmas gift.

After a brief spell on just the Google Play Store and Amazon App Store, it's now available on Apple's App Store.

In Fighting Fantasy: Island of the Lizard King, you try to free the men of Oyster Bay from slavery after they're kidnapped by the titular monarch.

Cue much dice rolling and old school adventuring as you fight various mutant beasts and choose your own direction through the twists and turns of this Ian Livingstone-penned romp. 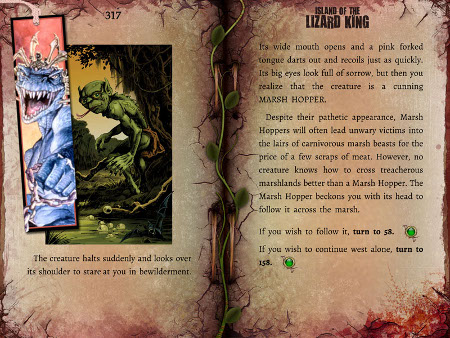 There are the usual difficulty settings here. Oh, and Tin Man's new auto-mapping system (this enables you to keep track of the directions you've turned and the choices you've made).

You can choose between coloured and classic black-and-white illustrations, and can use the bookmarking system to stick a digital finger in the book in case you've made the wrong decision.