What tablets do Google, Samsung, Dell, Microsoft, HP, ASUS and Nokia have planned?

With over one million iPads sold in just 28 days, there appears to be a healthy appetite for tablets in this cynical world of notebooks, iPhones and Justin Bieber.

But with success comes competition and it looks like Apple won’t be having it all its own way in the burgeoning market for much longer. Not if pretty much every other electronics firm in the world has anything to say about it.

Things have moved on quite a bit since our last tablet round-up though, with a number of the devices listed being cancelled, not to mention that we still thought the iPad was called the iSlate.

So without further ado, let's take a look at how the major players in this rapidly growing bigger-phone, smaller netbook market are coming along.

In the tablet sphere Google has remained ominously quiet, but that looks set to change with its recent acquisition of BumpTop, a company that creates 3D multi-touch desktop software. Considering how few desktops use touchscreen monitors, it seems likely the move was made with a tablet in mind.

This theory is supported by a video concept that popped up on the Chromium Project website a few months back (see below) that demonstrates an experimental UI to be used on tablet PCs.

Of course this could all just mean Google are planning a tablet-specific version of Android OS for other manufacturers. But remember this was exactly the route they took before launching the Nexus One into the mobile market, and I’d be very surprised if it’d let Apple eat up the new market without some form of competition.

Subscribe to Pocket Gamer on
Samsung - S-Pad The second largest phone maker in the world, South Korean electronic giant Samsung looks set to wade into the tablet market with the 7-inch (17.8cm), Android S-Pad. The S-Pad uses Samsung’s highly praised Super-AMOLED screen, as seen on the Wave and Galaxy S handsets, which not only has a better contrast ratio (read: it’s blacker) than standard LED screens, but also reflects less light and consumes less energy. The tablet is rumoured to be released in August in South Korea, with other territories unconfirmed. It’s not been officially announced yet though, so there’s still a chance Samsung will have a more original name. HP – Slate(d?) Hewlett-Packard was quick to jump onto the tablet bandwagon, with an announcement back in January that its own Slate (that name sounds familiar, too) will come with Windows 7 and be the first true iSlate- sorry, iPad-killer to arrive on the market. Reportedly packing a powerful 1.6GHz Intel Atom processor and a large 8.9 inch (22.9cm) screen, the HP Slate was scheduled for a June release and a price range of $549-599. However reports are emerging that, due to HP buying smartphone maker Palm and the disappointing performance of the Windows 7 OS, the Slate has been cancelled, replaced by Android and webOS-tablets. Microsoft – A new Courier? Microsoft’s ex-CEO and co-founder Bill Gates famously remarked to CNN back in 2001 that ‘within five years I predict [the tablet] will be the most popular form of PC sold in America’. With the news that the Courier, Microsoft’s long awaited dual-screen tablet, was to be no more it appeared as if the Redmond-based computing giant had changed its mind about the tablet PC market. Not so, if a recent quote from Bill Gates on Fox Business is anything to go by. ‘Microsoft has a lot of different tablet projects we’re pursuing’ teased the multi-billionaire. ‘We think that work with the pen that Microsoft pioneered will become a mainstream for students’. So a Courier-like tablet with a pen and Microsoft Office is still on its way? We’ll have to wait and see. Nokia – It's just a bigger N800 Despite having a hard time cracking the highend smartphone market, Nokia is rumoured to be staging an attack on the tablet PC market sometime later this year, if analyst predictions are anything to go by. Unlike some analyst predictions though, this one seems actually sounds likely as Nokia already has small Internet Tablet devices like the N800 on the market. We assume it will use the Nokia-Intel MeeGo OS and Intel Atom hardware, while rumours suggest the Finnish company is already in talks with suppliers and design manufacturers and that its first proper tablet PC will hit shops as early as this winter. Dell – Streak 5, 7, 10 Dell are one of the few companies along with ASUS and Lenovo that has brought out a number of netbook/tablet hybrids, but it’s also been one of the more vocal supporters of the pure tablet form as well. The Streak range of tablets are the Texan company’s Android-powered response to the iPad, and will come in 5, 7, and 10 inch (12.7, 17.8, and 25.4cm) variants and be available in a variety of bright colours normally reserved for Dell’s laptop range. The Streak 7 is expected to launch in June 2010, with the Streak 5 (formally the Mini 5) to follow a few months later and the Streak 10 to appear early next year. 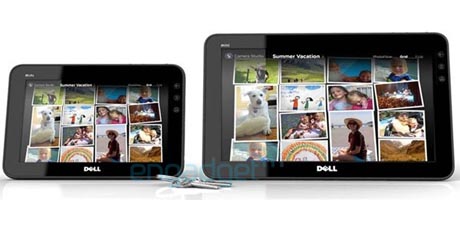 ASUS – Eee Pad One of the biggest netbook and laptop makers in the world, it’s a logical assumption that Taiwanese OEM ASUS would move in with a tablet of its own. In fact, ASUS appears to be launching two tablets, one with either Google's Android or Chrome as the OS, and another with either Windows 7 or Windows CE powering its innards. Rumours also point towards an Intel notebook chip powering the two devices, plus a Tegra 2 GPU and a massive 10 inch screen (25.4cm) for display. The two Eee Pads (no, that isn’t a spelling mistake) are due to be revealed in full at the Computex 2010 event next month, with a tentative release date of July. RIM – Just loves hoarding screens? Perhaps the most surprising rumour is that Research In Motion, makers of BlackBerry, the largest-selling smartphone makers in the US, is also suspected of drawing up plans to enter the tablet market. It's suggested the company is in the process of buying up stacks of 8.9 inch (22.6cm) touch screens from the Amazon Kindle’s screen supplier, Hon Hai Precision Industry Co. If this is true, it could mean that RIM could be breaking down Apple’s tablet door as early as this year, although given that the source seems dubious, I wouldn’t exactly eat my hat if it didn’t.