As I mentioned in my 7-day review of Farm Heroes Saga, King's latest is a bit like Candy Crush Saga. Scratch that - it's a whole heck of a lot like it actually.

But when I finished my write-up of Farm Heroes Saga, I thought: "Hold on a second! Some people probably haven't played Candy Crush yet!"

Thus, I decided there and then to pen the article you're reading now. Yep, a complete beginners' guide to playing Farm Heroes Saga and getting the most from it.

In this guide, I'll explain the basics of play, how the best Boosters work, reveal a few miscellaneous tips, and help you rise up those leaderboards. 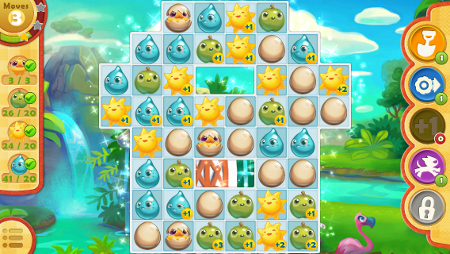 The aim of the game is to fulfil win conditions set before each stage by using a limited number of moves.

To do this, you have to swap Cropsies (the icons of fruit and vegetables) with an adjacent Cropsie, matching three or more of the same kind. By doing this, they are removed from the playfield and added to your points total. More Cropsies fall from the top of the screen to take their place.

As you can imagine, matching just three Cropsies at once quickly has a detrimental effect on your chances of completing a stage. So, you'll need to start thinking about matching large numbers of Cropsies at once, and also taking into account combos.

To create a combo, you cause other matches to occur when making a match (on account of Cropsies falling into new positions). If you're smart, or really lucky, you can remove dozens of icons from the play field in just a single move. Basically, keep an eye out for these opportunities.

Generally, I've found that creating vertical matches begets combos more often than horizontal ones. If this proves tricky, though, just take your time and try to think one or two moves ahead. 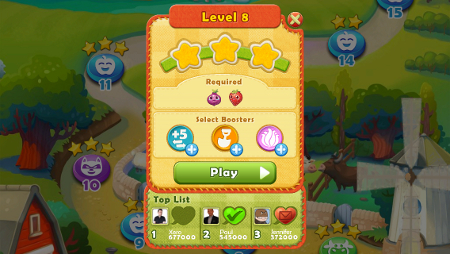 In a lot of levels, you'll also be asked to open flowers or hatch eggs or what have you. There are some special rules that apply here.

Take the eggs, for example. You need to match them with one another multiple times to hatch them, meaning you'll need to work the icons across the board and be mindful of positioning them in other areas with large quantities of eggs.

Whichever special Cropsies you run up against in a stage, try to collect the required number of them before focusing on other Cropsies.

To make your progress through the game smoother and faster, you will need to call upon the various Boosters, too. I found I would return to a few of them time and time again.

The 5 Extra Moves Booster results in exactly what you might think it would: five moves are added to your total at the start of a level.

Though the Shovel's ability to remove one Cropsie (or shatter ice or fill a bucket) can get you out of a tight squeeze, the Tractor Booster is the much better bet. After activating this, all Cropsies along a horizontal row are removed.

Perhaps even better than that is the Super Fruit. With this, you can remove all nearby Cropsies and add two to their value. If you can then match the boosted Cropsies, your score will go through the roof.

I also found the Color Collector - through which all Cropsies of a single type are removed - to be extremely useful, although you should always remember to target the colour of Cropsie with the most icons on-screen for the biggest effect. 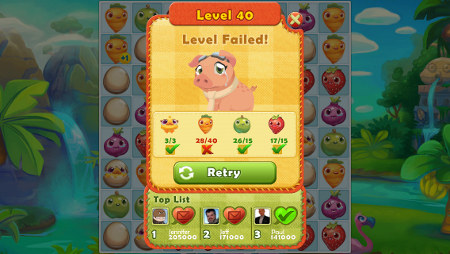 If you're aiming for those really big scores, though, you'll also need to make liberal use of the Bonus Rewarder Booster (in which all Cropsies required to finish a level receive a bonus of +1).

Come to think of it, if you're reaching for the highest heights and really want to dominate the scores, you'll need to plough everything you have into a level - all the Boosters and game-playing skill you can muster, plus a bit of luck.

Luck is a force you'll have to come to appreciate - or at least tolerate - in Farm Heroes Saga.

Sometimes, you're unlucky and the layout of the Cropsies on the board runs contrary to your objectives. Sometimes, you make a move just as you notice the better one you should have made.

If you want to turn the game in your favour, then use up some Gold on the Boosters, and don't forget to use up those Magic Beans to triumph in the tricky boss battles.

If all else fails, then try walking away from the game for a bit. Boosters recharge over time. So, too, does your stock of lives. Dip in and out of the game regularly, then, to get the most game time in during the course of a day with the maximum amount of abilities to hand.