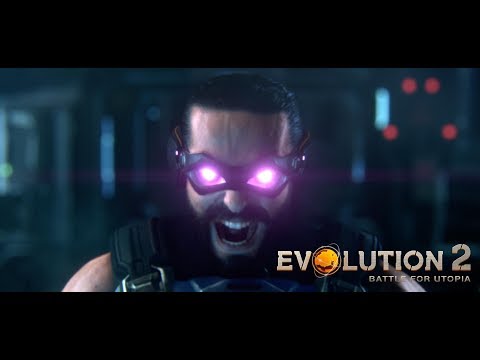 The story of Evolution: Battle for Utopia continues in the unsurprisingly named sequel, Evolution 2: Battle for Utopia. There have, however been some major changes to the mixture, and it certainly seems to have been for the better.

Before we start, let's talk a little about the first game. Back in 2014 we spent a week playing through the original, noting that the store page had been somewhat misleading, with RPG-style combat and an overworld, base-building metagame making up the core of the experience.

Perhaps it is our feedback, and similar from others, which led to the changes which are delivered with Evolution 2. The game is now being pitched as a mix of third-person top-down shooter, action, strategy and RPG.

Utopia, as before, remains a billionaire resort which has fallen to marauders, bugs, beasties and battle robots. However now you'll be moving from cover to cover as you try to fire on waves of enemies — including out-sniping snipers — while fighting alongside allies. It certainly makes for a meatier offering than the first title.

It's all made in a way where the core focus is on the wave-based combat, although there is a story which is eked out through pre-combat conversation sequences.

"-Unique sci-fi setting. Space post-apocalyptic biopunk action game set on a distant planet.
-Unique balance of genres. Fusion of strategy, RPG and top-down shooter action game, featuring the ingenious combat system.
-Tactical gameplay. Upgrade your character and their companion, select the most efficient weapon, and abuse weaknesses of your enemies.
-Engaging PvE campaign. Plenty of missions and epic bosses. Your enemies become stronger from battle to battle.
-Cooperative mode. Summon your loyal allies and complete missions shoulder to shoulder with other players.
-Online battles. Battle in full online multiplayer. Win the top positions in the rating and receive unique bonuses for your victories!
-Armory of the future. Fantastic weapons featuring unique statistics and upgrade system! It's not only good old firearms! Enjoy the energy, acid and bionic cannons!
-Upgrade your base: unlock new premises and learn the technologies of the future! Evolution without limits!
-Interactive arenas and realistic 3D animation grant complete immersion!"

Evolution 2: Battle for Utopia is available now on the App Store and Play Store.