SuperPlanet’s Evil Hunter Tycoon has added an exciting new guild war content called “Battlefield of Victory” in its latest update. The 10 vs. 10 large-scale match not only boosts the mobile simulation RPG’s fun factor but also brings with it tons of event rewards in celebration of the update.

Evil Hunter Tycoon lets players manage the economic affairs of their village while hunting monsters and boosting their characters, combining RPG elements and the appeal of mobile sims in an adorable, pixel art package. In the Battlefield of Victory core content, players can test their battle prowess in an epic 10 vs. 10 brawl using a two-week season system. Four days will be dedicated to the application period, while another four days will focus on team composition. The battle itself will last for a period of six days. 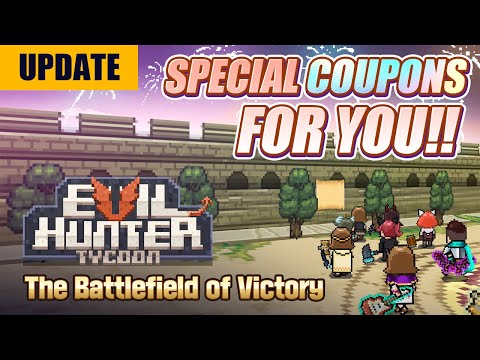 Players who wish to join the guild war will need to have at least 80,000 of Attack Power. Hunters will also need different types of occupations for team flexibility. Should there be more than four Hunters of the same type, players will incur penalties. Then, players must place these Hunters in 10 of the 16 slots.

To cap off the festivities, SuperPlanet is giving away Superior Hunter Invitations X5 within the game, as well as a limited 7-Day Login Event and an exclusive Vacation Costume Coupon. If you’re eager to join the celebrations, Evil Hunter Tycoon is available to download on the App Store and on Google Play. It’s a free-to-play game with in-app purchases. You can also visit the official YouTube channel to stay updated on the latest developments, or join the community of fans over on the official Discord channel.

Hungry for more RPGs that will have you obsessing over your character stats and skill progression? Have a look at our list of the top 25 best RPGs for iPhone and iPad (iOS)!