Hands-on with Minecraft for DS, with homebrew version DScraft

In many ways, indie phenomenon Minecraft is a lot like Angry Birds.

Well, maybe not on the surface, so much, seeing as one's about creating epic structures in a blocky dystopia governed by nightmarish creatures and the other is about killing pigs with birds.

But they're both responsible for months of compulsive addiction, they both rose from humble beginnings to become whirlwind successes in their respective markets, and they both migrated to multiple platforms and devices during their meteoric rise to power.

And for any device they haven't reached yet, like the monochrome Nook Touch e-reader or the Nintendo DS, some die-hard fan will inevitably put in the hours to painstakingly reverse-engineer the game and squeeze it, whether it fits or not, onto that platform.

That's why, thanks to enterprising homebrew mod man smealum and his downloadable app DScraft, we can now play a cut-down copy of Minecraft's creative toybox mode on DS.

DScraft emulates the free alpha edition of Minecraft. That means it has the Lego-like sandbox, which allows you to wile away the hours by designing epic structures, creative buildings, and time-wasting recreations of the Starship Enterprise, without having to worry about the PC game's band of murderous creepers, zombies, and bow-wielding skeletons.

Rather than present you with any definable goals, DScraft simply ditches you in a randomly generated world of blocky hills, geometrically perfect mountains, and cuboid lakes, and invites you to make your own fun. But that freeform play has never stopped reams of Minecraft experts from crafting giant worlds and awe-inspiring models.

When you're plopped in the world, you'll find an inventory of different block types to use (ranging from wooden planks and blocks of dirt to flaming torches and buckets of water). You can then spawn blocks to make structures, and also destroy them to carve out caves or fix mistakes.

Other than that, it's up to your imagination. 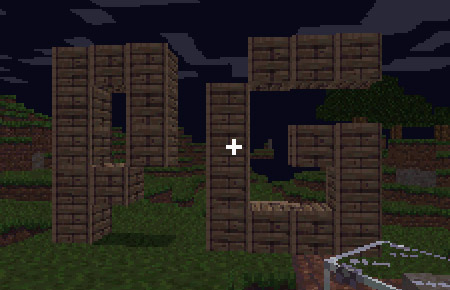 The height of my creative ambition. Pathetic, I'm sure you'll agree.

The game works surprisingly well on Nintendo's last-gen handheld. By aping the controls of Metroid Prime - scraping a stylus around the touchscreen to move your viewpoint, hitting the left bumper to 'shoot', and double-tapping the screen to hop - DScraft never restricts your movement.

It looks great, too, providing an convincing emulation of Minecraft's low-fi style on the aging portable console, complete with a stretching draw distance, a dynamic sky, a clockwork day / night cycle, and scrumptious lighting effects.

There's no question that the game would be even better on the 3DS, but until the homebrew scene takes on Nintendo's latest console, this will have to suffice.

DScraft proves that the much-maligned DS homebrew scene is still alive and kicking, and deserving of further investigation.

It might not be worth investing in a flash cartridge for, but if you've got one lying about and fancy making Minecraft epics on the bus (without coughing up for an Xperia Play), it's definitely worthy of a download.

How to play Minecraft on your DS via DScraft