Android port 'around the corner'

After initially only being available on later iPad models at the tail end of last year, steampunk crafting MMO Deepworld is now compatible with iPhones and first-gen iPads, with an Android version expected soon.

Like in Minecraft - Pocket Edition and The Blockheads, you are dropped into an open-ended fantasy realm in Deepworld.

Once inside, you can scour the surrounding area for resources, and use the raw materials to build whatever you like.

What sets Deepworld apart from its peers, though, is its steampunk setting. The standard-issue forest environment of recent crafting sims is replaced here with a smoky industrial landscape littered with mechanical constructions and drowning in acid rain. 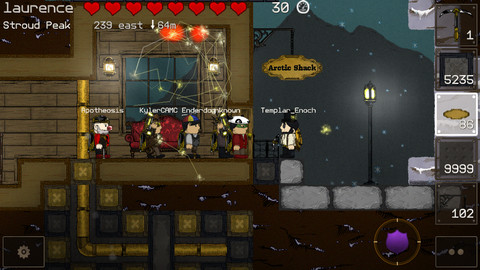 As well as giving world-building fans a break from staring at square trees, Deepworld developer Bytebin went out of its way to make its game a social experience.

The game lives entirely in the cloud, you see, meaning you find yourself hopping in and out of persistent worlds filled with fellow architects. Once you've made some friends, you are then encouraged to work together to complete co-op missions.

We've also been told that an Android version is "just around the corner".

Check out our hands-on with Deepworld for a clearer idea of what to expect. If you like what you see, you can download the game for free from the App Store now.

Cloud-based steampunk crafting at its finest