"Hey. Do you want to come see my castle I built? It's just beyond this mountain."

When it comes to introductions to a new game, this might be a new favourite. I had just landed in Deepworld - a post-apocalyptic steampunk landscape - when I was befriended by other players who wanted to show off their hand-built creations.

You, see Deepworld is a bit like Minecraft or Terraria - you dig up raw materials from the earth and then build whatever architectural monstrosity you desire - but it's way more social.

The landscapes are stored in the cloud, so friends and random adventurers can pop into your game at any time. And everything is persistent.

Anyway. That first castle was certainly an impressive creation. A huge, looming fortress with endless rooms and hundreds of decorative items that had been crafted from raw materials. Or, more likely, looted from the old pre-apocalyptic houses that have since become trapped underground. 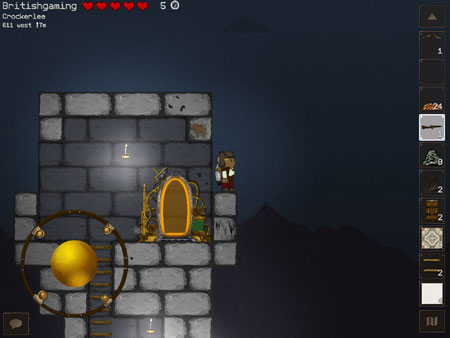 There are systems in place to stop bandits and marauders from showing up and busting your precious castle. You can buy and place beacons that stop other players from messing with any block in its radius.

If you don't want to spend, you can place traps and turrets. Whatever you need to protect your homestead.

Deepworld isn't just about building stuff, though. There are some missions to accomplish, and you'll probably want to work co-operatively with other players to get them done.

One zone is plagued by acid rain, for example, which is life-sapping stuff that will keep you locked indoors whenever it rolls through. You can shut that acidic downpour down by finding a purifier, then fixing it by hunting down its disparate bits.

Along the way you'll probably run into weird enemy wildlife. Luckily, you can craft weapons (from pistols to flamethrowers to energy weapons) to keep you safe.

Deepworld's controls are a little finicky on iPad. Moving about with the virtual D-pad is tricky, and you've got a jetpack but it's very floaty and imprecise. Switching between your trusty pickaxe and your arsenal of guns is also hard when you're being attacked. 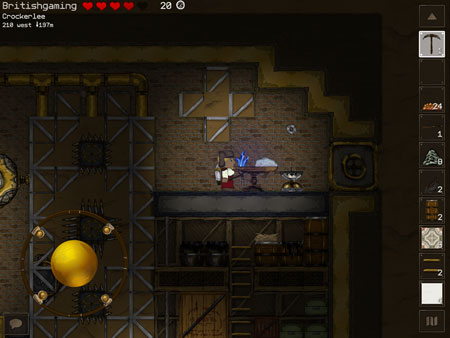 In general, the game is pretty unfriendly to new players. It's an overwhelming experience to be dropped into a decaying world, set upon by killer robots, drenched in acid rain, and surrounded by more experienced players. The menus and tutorials are certainly comprehensive, but also crazily complicated.

I had the good fortune to have a member of the game's tiny team of developers help answer all my dumb questions and explain the more complicated systems. Without a spirit guide, you'll just need to stick with it.

But, if you like Minecraft and Terraria, you fancy crafting some steampunk gadgets and vehicles, and you want to play with your pals, it might just be worth the investment.

Deepworld is currently available on Mac, but it's coming to iPad later this month, and to iPhone before the year is out.

Cloud-based steampunk crafting at its finest