It starts, as so much does, with a menial job. By the end you'll be heading a paranormal cult, casting spells, summoning horrors and collecting arcane books like they're Funko Pops. That's the sweep of Cultist Simulator, a game which, fittingly, makes both a pleasure and a pain out of the journey.

Play revolves around dragging cards onto action slots and watching timers count down. To earn money at your job, for example, you drag the Position At Glover's card onto the Work slot and maybe add the Passion card for extra effort. That's it. There are moments where you feel like you're in a free to play game that you had to pay for.

Yet this simplicity hides a clever and novel piece of design. It is so straightforward that the game has no tutorial, no explanation, no rules. Yet it is also flexible enough to mask an engine of considerable complexity.

Just as you can Work by itself or Work with Passion, many of the actions in the game can take multiple cards. You won't know this until you start experimenting, as the extra slots only show under certain circumstances. If you Explore an occult bookshop, for example, you'll see an extra slot for Funds with which to buy horrid books. But if you Explore an abandoned factory there are slots for some of your cult follower cards to send on the mission.

Working out what can go where to get which results is, then, half the pleasure of the game. It often throws you curveballs: you might not expect to be able to Dream with Dread, for example, but there are occasions when you can. And it seems to make a point of throwing spikes at you early. Many cards are important resources like Health or Contentment and it's rarely obvious how to get what you need in order to progress.

Experimentation is the only route. The game offers vague clues, such as highlighting what cards can go in what slots, but with so many hidden mechanics, it's a hard slog. When something finally clicks though; well, it's like discovering occult secrets encoded in a forbidden tome. 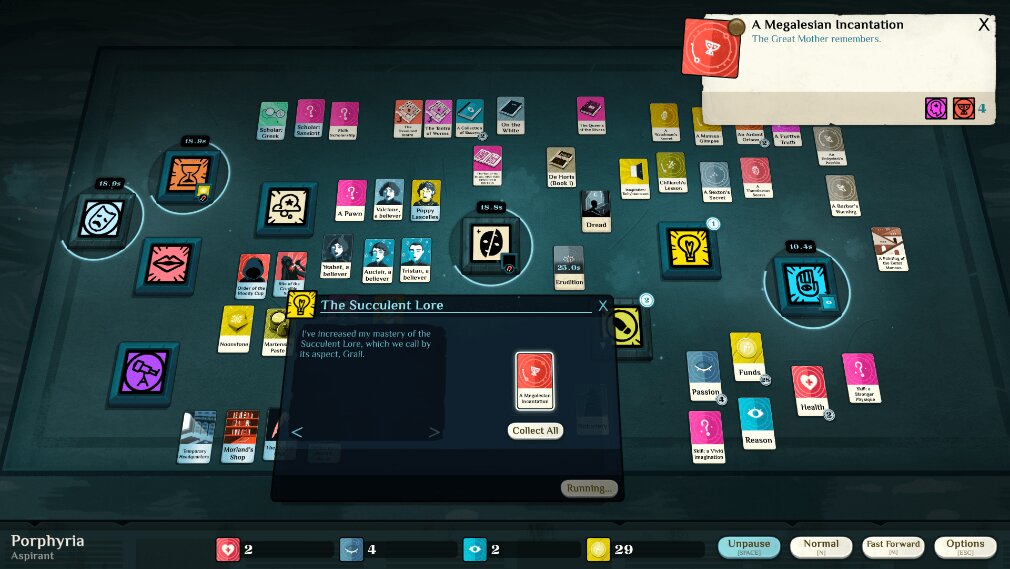 As you might expect, that leads to a lot of failures. There are many ways for your forbidden quest to end badly. A timer consumes a Funds card every minute, so you'll need to Work to keep it fed. Your physical and mental health can be damaged by age or disease or worse things. Your nefarious activities generate evidence which can attract the attention of hunters. It's harder work than you might imagine, studying the realms beyond the veil of sleep.

The more you learn, the more cards and actions open up on the screen. It won't be long until you have a half-dozen or more timers on the go at once, trying to satisfy various demands and keep the story moving. There are similarities with the pressure-cooker feel of tycoon games, except here your business is meddling in the arcane. It's very easy to forget important things and spiral into failure.

Thankfully, then, there's a pause button. And if you're a mobile player, you'll likely be using it a lot. Cultist Simulator started life on PC. And while its drag and drop mechanics translate well to mobile, the smaller screen is a constant headache. You can lose sight of essential things off the edges of the display, and a pinch-zoom take precious moments as timers tick down.

You can play it on a phone but the smaller your device, the more patient and pause-heavy you'll need to be. And the need to learn through replay can stack up the hours faster than may feel comfortable for bite-sized play.

It also means that the text generated by each card and action is less prominent. And that's unfortunate because these aren't your every day choose your own adventure paragraphs. These are whispers of a nightmare, adorning your quest with a ghoulish aesthetic no graphics could provide.

Good job too, since the graphics are pretty basic. But these little paragraphs weave the baffling mechanics into a unique horror story for every play. The developer, Weather Factory, is a splinter from Failbetter Games who created Sunless Sea. Both games make a centrepiece from the forgotten art of brewing atmosphere from words.

Cultist Simulator is a novel, divisive game. Its meandering opacity will delight some with exactly the qualities others find dull and frustrating. But if you've got the stomach to learn through dying by starvation, madness and getting sacrificed in one of your own rituals over and over, do try it. Like the theme it wears, it's an otherworldly experience with few parallels.

A unique, compelling blend of story and strategy, but the deliberate slow, steep learning curve may prove offputting
Next Up :
Otaku's Adventure mobile review - "A truly bizarre love triangle"