I'm trying to think of something that would please me more than cats in tanks. Maybe dogs in submarines? But I'm not sure if the dogs would like being in submarines, which makes it difficult to figure out without talking to a dog about it.

The reason this particular question is swirling round my slightly addled brain is CATS (Crash Arena Turbo Stars). It's the new game from Zeptolab, and it's all about cats driving heavily armoured death machines. Because, y'know, all games should probably be about it.

But if you're looking for some fierce action, you're going to be disappointed here. The core of the game isn't the fights, it's actually building your feline murder car.

The game starts off by giving you the bits you need to make your first machine. From there you're dropped into a scrap. Well, I say you, I actually mean your kitty.

You don't have any control over the fights. Your machine rolls forwards, swinging or firing its weapon. After a few seconds one of the combatants will have exploded. 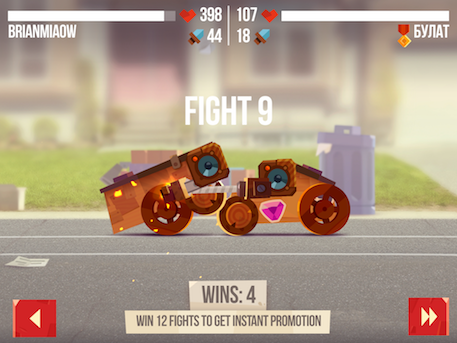 The scraps are super short. After each machine has got a few whomps in, if one of them hasn't blown up, the walls of the arena start to close in. The first cat that gets hit by them is the loser.

Winning fights gets you new bits to make new machines with. There are chassis, wheels, weapons, and boosts to stick on. Oh, and stickers as well.

You can't just lump everything on to a single body though. There are different points for attaching different things. Wheels usually go at the bottom, with different chassis having different numbers of places to stick things.

Some combinations of items work better than others, and there are bonuses to be discovered for making the right pairings. But the scope for experimentation here isn't massive. 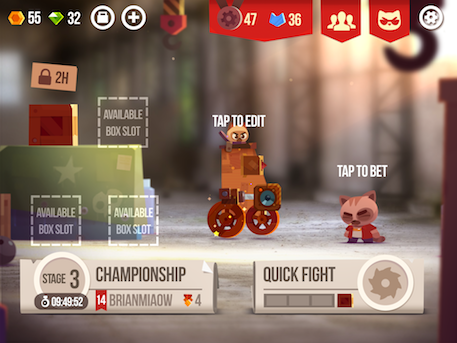 After a while you'll settle on a decent machine and roll with it. Once it gets too weak to compete in the challenges or quick fights, you'll try and tweak things, or buff up the tank you've got by forging parts together.

Despite this being a game about cats in tanks, there's not really that much excitement. You'll probably play it with half an eye, watching how the battles play out before jumping in to tweak things when you start getting mullered.

If you come into CATS looking for action, you're going to be disappointed. This is very much a casual game of putting things in place and seeing what happens.

And if you're looking for any depth you're going to be left feeling a bit flat too. There's definitely an interesting idea here, but a lot of people will find the final product a little lacking.

There's a solid idea at the core of CATS, but it's not going to be to everyone's liking
Next Up :
UFO99 review - "A fun little arcade game on the go"