And a massive wodge of other stuff

I've got some news for you. Are you sitting down? Good. Supercell has updated Clash of Clans.

Feel free to take a moment to let all that settle in. An update. Yes. Wow.

And it's a massive update at that, full of new things and stuff and balances and tweaks and stuff. So, that's exciting.

At the top of the list of things I'm supposed to tell you about is the series of new hero abilities. Both of the in-game heroes now have special moves they can perform once per battle after they've been deployed.

The Barbarian King can use Iron Fist to make himself and any nearby barbarians enraged for a bit. The Archer Queen, meanwhile, can use Royal Cloak, which makes her invisible to enemy defences for a while. 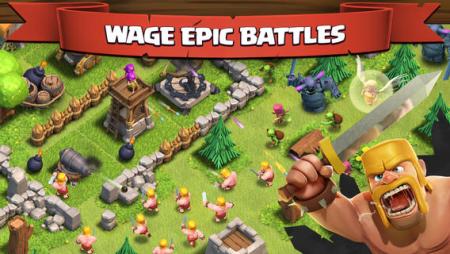 If that isn't enough (is that enough?), there are now Level 6 Minions, a Level 5 Freeze spell, and a 5x boost recovery when your Heroes are sleeping. There's also been a reduction in the costs of the Spell Factory and Barracks.

Furthermore, there are changes to the Clan Co-Leader options and new gem growths around the world. Oh, and mysterious boxes packed with precious stones are popping up.

Then, there's about a million interface tweaks and rebalancing pokes and prods that I'm not going to write about here. If you like that sort of thing, though, you can read about them over on the Supercell forums.