An RPG in which your mum fights your battles

If you love Earthbound, then Citizens of Earth is the kind of modern take on the RPG classics that will put an excited smile on your face.

We've played around with Citizens of Earth ourselves already, and found it to be a wonderfully whimsical take on classic RPGs.

You play the newly elected Vice President of the World, but rather than attending to global problems, you're starting off with your hometown and a local conspiracy.

Fighting is turn-based, and you'll be able see and avoid your enemies rather than those dreaded random encounters. Enemies include evil coffee plants at the local Moonbucks, obese tanks in the Capital, and eager tourists at the Jamaipan Resort and Spa. 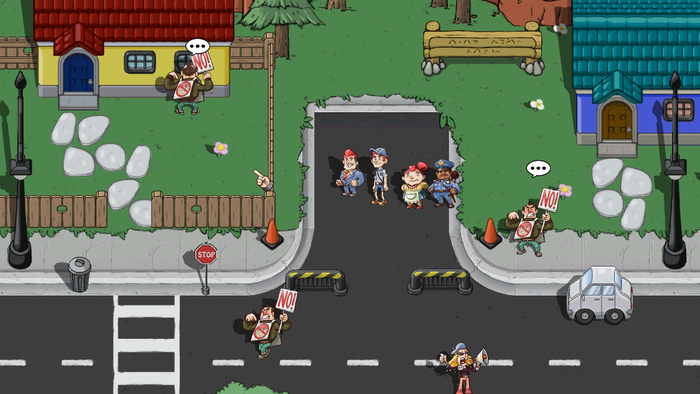 Being the VP of the World, and a politician, you don't fight your own battles. You'll recruit your brother, mum, a baker, teacher, and other locals into your party and get them to fight for you.

As your fighters level up, they'll become stronger and, in turn, the building they belong to (post office, school, bakery) will improve as well. That not only helps you out, but settles things in the town a little, too.

We spoke to the founder of developer Eden Industries, Ryan Vandendyck, to ask him about iOS and Android versions.

"iOS and Android is something we want to do, but given the weird marketplace dynamics it's something that would take a lot of thought about how to work it," Vandendyck told us.

"So we didn't feel honest about collecting funding for it when we didn't have a legitimate plan," he added.

So don't scratch mobile versions of Citizens of Earth out of your books entirely.

For now, if you're a 3DS or Vita owner, it would be a good idea to keep an eye on and support the game however you can.