Each week, we send out early codes of selected games to members of our App Army and ask for their feedback. One pick this week was Spunge Games's Cartoon Survivor, a stylised autorunner with... a peculiar control scheme.

Sjoerd: Sometimes you want to play a game in public, and you don't want people to look at you like you just filled your briefs. Cartoon Survivor can only be played with tilt controls, which is pretty annoying sometimes, especially when other people are around.

The gameplay is not revolutionary either - it's yet another endless runner. On the upside it has a cool art style that makes the creatures look as if they're made of carbon. It's an art style I've never seen before.

The first five levels are free, but to play the other 18 levels, you have to pay quite a lot for what you get. It's $1.99 for 6 levels, or $2.99 for the full game. I hate these kind of payments in games. Apps should either be free-to-play or premium, not both.

Cartoon Survivor is fine for the first few minutes you play it, but it definitely didn't hold my attention for long. 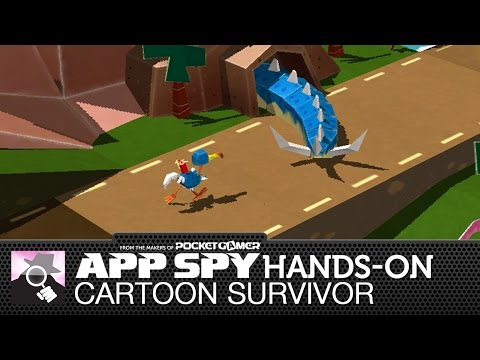 Subscribe to Pocket Gamer on
Newmanator: Initially I liked this game. It's cute and seems like it should be fun. The sound effects are fun at first, but the weird scream of the dodo gets really annoying, so I muted it before long.

After achieving three stars on every level in the first section, I had to pay 150,000 in game coins to go on to the next few levels... or use real money. I worked my way through the maps about 15 times and only ended up with 10,000 coins. Getting 150,000 would take hours.

This game is free to try, and I'm glad I was able try it before spending money on it. It's hard to gauge where you are on the path at times, and the timing for jumps seems impossible. The controls are just too finicky and imprecise.

I can't recommend Cartoon Survivor. That's solely based on the fact that I wouldn't spend three dollars for more of what I've been playing. Maybe with better controls, more reasonable pricing, and a less confusing angle, I would quite enjoy this game, but for now this is a no-go.

Quincy: I really tried hard to love this game but there are just too many issues to overcome. Cartoon Survivor looks fun and the cartoon characters are great, but that's all there is to it.

I personally really dislike tilt controls in any game where you aren't moving a ball around, and in this case this style of control adds nothing to the game at all. Instead you're forced into using a weird control scheme, which combined with the viewing angle is rather painful to deal with.

If that's not enough to make you pull your hair out, extra seasons in the game are locked behind IAPs. I think that's where most people will end their journey. It's good for a quick gaming fix, but not worth paying for with the present control scheme.

Olivier: I enjoyed the humorous presentation, cartoon stylings, and sassy soundtrack, but was really put off when I found I had to pay to unlock worlds two to four.

Cartoon Survivor is fun in short bursts even though controls are flawed. The biggest pity is the IAP wall you hit so soon after you start.

Conor: I don't really like this game because the levels are too difficult. The controls should really involve swiping rather than tilting. The cartoon feel the game has is great graphically, but that's really all it has going for it. Sjoerd: How can this app be over 400MB? That's more than Subway Surfers, Minion Rush, and all four Temple Run games combined! Ryan T: I haven't found Cartoon Survivor to be bad so far, but it could be much better. I really like that calm, cartoonish vibe the game gives off.

Much like everyone else, I really didn't appreciate the tilt control scheme. I mean, it's not the worst thing ever, but I'd much prefer a touchscreen-oriented control set for an autorunner like this.

Overall, I think Cartoon Survivor is decent - I'm not as disappointed as the rest of the troops so far. It has the potential to be a hit, but it could really use some work.

Kainen: I'm really not enjoying Cartoon Survivor. It looks great, and the jump button and speed up buttons work fine, but the tilt controls are too unresponsive to be of any use.

The sad thing about all this is that I think if they had not used this control method alone I may have enjoyed the game a lot more.

There are far better things to do with your time than play Cartoon Survivor as it stands.

Kym: I played tutorial and first level, and I'm not impressed. The main issue is that the tilt controls aren't as accurate as tapping or sliding to move.

It's downright frustrating! Especially when you're trying to get a little late night gaming in before bed...

Clint: I've been playing this for a couple of days now. I'm really trying to get into it, but the control method holds me back from enjoying it. It's just not responsive enough.

I like the overall style of the game - it looks good and the audio is spot-on. One interesting free-to-play mechanic is the option to double your coins at the end of each round if you watch an advert.

It's totally optional, but if you have a good round then it's worth it. The cost of the IAPs aren't too extortionate, ranging from 79p to £8.99 for 50,000 coins all the way up to one million. I don't think I'll be spending any real money on it, but I think anyone who does wouldn't feel ripped off.

Taylor: I'm in consensus with those before me: the tilt controls just don't work. It makes it unnecessarily difficult, especially since you're already at an angle because of the camera.

Moving the device more just skews things more than it should. At times, you can't see the traps you're meant to avoid because of the camera angle.

I'd think that a virtual stick or some dragging control method would work a lot better. Other than that... it's a fun game. I can see myself playing this when I have nothing else to do.

The graphics are wonderfully bright and colourful - it's like candy for your eyes. I'd love to see more games with this style.

I don't usually like autorunners but this one sucked me in. Other than the camera angle and the tilt controls, Cartoon Survivor is a certainly worth a shot.

Clint: After playing for a few days now I can safely say that there needs to be other control options, and that the isometric view doesn't lend itself to this style of game - there's no time to react to the obstacles.

I think it's because your brain is having to process the angle that you're running at, as well as the angle that the device needs to be at in order to miss whatever's is coming your way. Being able to jump helps, but not much.

I have enjoyed the humour though in the game though. When the poor little dodo explodes if you don't make it to the end of the level in time it's pretty funny. The animation of him standing there behind the "Dead as..." message with smoke coming off him is a riot.

Chris M: If you're an autorunner fan, you should definitely check out Cartoon Survivor. It has great visuals, sound effects, and music.

It's cute, and there are two progression hooks - the costumes and sequential levels. It has a few unique features I've never seen before too.

One that works very well is that you have to call out the number of stars you are going for (Babe Ruth style) before you start the level. Depending on whether you select one, two, or three stars, you get a different amount of time to complete the level.

In a way that translates into the number of errors you can make and still finish before the TNT strapped to your back explodes. What doesn't work so well is the awkward use of a non-lane based isometric view combined with tilt controls.

I've never been a fan of tilt controls, but tilting left and right while your character runs diagonally really takes some getting used to. I'll give it a few more plays, but I don't think it will keep my attention.

The App Army have spoken! If you'd like to sign up, please have a gander at our App Army application article. Did you pick up Cartoon Survivor? What do you think of it? Let us know in the comments below!
Next Up :
Catalyst Black: 4 reasons to get hyped for this new battleground shooter