Destruction has been the bedrock of the Burnout series since its inception. Its depiction of humongous crashes, twisted metal, and gigantic explosions verges on the obscene.

Burnout Crash! tries to bring some of that high-octane, adrenaline-pumping pile-up action to your iOS device.

Tries, but doesn't wholly succeed. While the explosions and ridiculous damage are all still in place, the transition to the smaller screen hasn't been an unqualified success.

The game is a top-down pile-'em-up. You control a plucky little car that's speeding towards a busy intersection. The aim is to plough into traffic, causing as much carnage as you can and racking up points in proportion with the amount of damage you create.

You move your car with flicks on the screen, tapping when you've filled up the 'crash' meter to cause another explosion and push the madness that little bit further. There are buildings and static vehicles to destroy, and ever-present streams of incredibly stupid drivers add to the pile of wreckage in the centre of the expressway.

There are six streets to play through, each with three different intersections. On top of that, each junction has three different modes, with a variety of challenges to complete. Finishing challenges nets you stars that you can spend on new levels and better vehicles.

Alongside the normal crash mode, called Rush Hour, there's Pile Up, which is similar but focuses on fire rather than just breaking things, and Road Block which tasks you with preventing cars from getting through the mess you've made.

While there's plenty of content, Rush Hour and Pile Up are a bit too similar. Road Block requires a little more thought, but it highlights one of the game's major problems: crazy things are happening - tidal waves, tornadoes, and plane crashes - but you're never really in control of them.

Add to that a flicking mechanic that makes you feel like you're playing with marbles rather than automotive death machines and you're left with an oddly flat experience. There are moments of fun, but Burnout Crash! just can't capture the excesses of its console siblings. 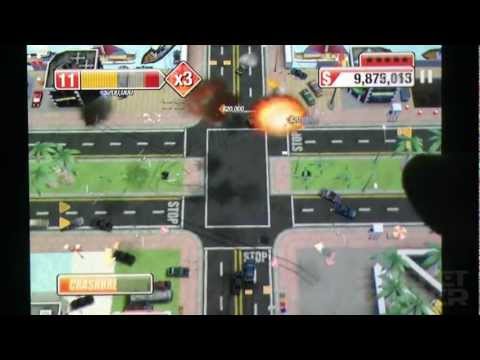 All of the ingredients for some destructive fun might be in place, but Burnout Crash! can't quite mix them together into an appetising meal
Next Up :
Hindsight review - "Deeply emotional but a tad repetitive"