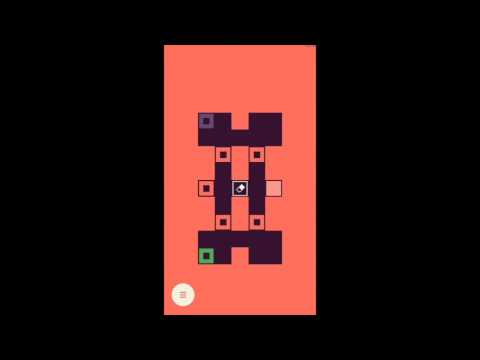 The aim of the game is to drag a coloured block around a maze and into a matching slot. The block leaves two coloured lines behind it, twin tails which mark your route so far.

The first wrinkle comes in the second level. This time, the slot is a different colour to the block. As a result, the block won't fit.

The solution is to change the colour of the block by dragging it across its own coloured tail. Whichever line is closest when the block crosses, this is the colour the block becomes.

Soon, the levels become tight mazes which force you to cross your own tail and change colour even when you don't want to. Then levels with multiple coloured slots appear, requiring you to change colour several times in a particular order.

It might sound like a bit of a headache on paper, but the BIP judges thought Twisted Lines was a smart and elegant puzzler which played to the strength of the touchscreen format.

Subscribe to Pocket Gamer on
Though technically a puzzler too, third prize winner A Normal Lost Phone couldn't be more different.

It's a smartphone sim in the most literal sense: you play the game by interacting with a fake smartphone operating system.

The idea is that you've found a phone in the street, and are browsing though the handset trying to find information about its owner, Sam. As you begin to leaf through the phone's contacts and messages, fragments of Sam's life start to come together.

Soon, you're wrapped up in a voyeuristic mystery, trying to find passwords and clues to discover what has happened to Sam, and why his phone is now in your hands instead of his.

Of course, the judges had a very limited time to get into the story of A Normal Lost Phone. But the concept, coupled with the convincing recreation of a mobile operating system, really won everyone over, and the game was awarded third place.

It also prompted everyone who played it to make sure their phone was password protected. So I guess we all won in the end.