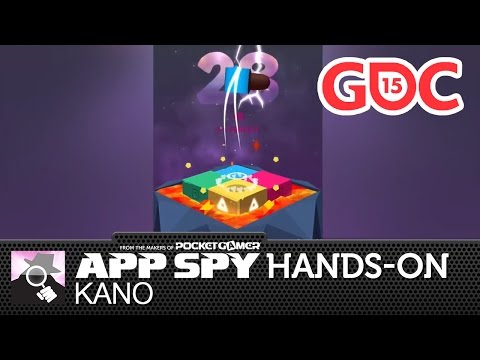 Whenever we go to a show like GDC, we like to run a Big Indie Pitch: an event where tiny game developers get to show their games to judges and journalists in speedy three minute pitches.

This year we had some amazing games - including an endless runner about making baby rabbits, a co-op game about making out, a Viking pillage 'em up, a defensive game where you make sushi dishes to fight zombies, and some exciting indies out of Singapore.

But there could only be one winner, and it was a returning pitcher. We last saw Glitche.rs at a BIP with the adorable chip shop sim Chippy. This time it took home first place with a clever little mobile game called Kano.

It's a simple idea: you have to bounce these weird heads on a platform above a volcano. The platform is split into four coloured cells, and you have to spin the platform in circles so the head lands on the cell of the same colour.

If you miss, the cell disappears to reveal a hole into the fiery depths of the volcano. You'll have to wait until you can collect a mask before the cell reappears.

Kano will be a free game, but with a simple payment model: you have a certain number of lives and when you run out you can wait, watch an ad, or just pay once to never run out of lives again.

The game's coming to both iOS and Android soon.

Second place went to a minimalist puzzler called Squares which is available on iOS but is coming to Vita - complete with a level editor. Third place went to a crackling one-on-one strategy combat game called WarFriends which we'll tell you about soon…

Thanks to Singapore Game Box and TrailerFarm Indie for sponsoring the event
Next Up :
Figure Fantasy adds new figurines, limited in-game rewards and more in "A Certain Scientific Railgun T" collab