We talk heroes, maps and Serfs...

This week iOS users came into some luck: real-time strategy title, Battleplans, came to the App Store for the first time, available free. The game, with its aesthetically-minded design and unique features, is set to enthral Apple users worldwide, so we had a chat with developers C4M to get the lowdown on the release.

"We don’t want to blow our own trumpets, but we’re really proud of this title so forgive us if we sound a little cheeky. Battleplans brings unrivalled strategic depth on a massive scale. This is achieved in three steps:

What unique challenges did you face during development, and what did you do to overcome them?

"Ensuring that the unique defence mechanism was fine-tuned enough to be used with ease was at the forefront of our plans.

This involved carefully looking at UI, controls, and limits, as well as tweaking the amount of unit autonomy. With everything we did, the ultimate goal was to make the gameplay feel better for the player.

We also wanted to make sure that PvP felt like 'real' war and not just a ladder where players only compete on score. So we spent a lot of time developing the framing for competition, so that players feel more invested in their tactical choices.

Another thing we did was we kept the various troop types uniform, so that players can immediately recognise that they’re facing, say, Sentries...or just Serfs.

We addressed this by giving each side a solid colour, contrasted with black, so that you’re never confused about which side any given unit belongs to."

What part of the game are you personally most proud of, and why?

"It would have to be the sheer variety of battles that can arise from how passionately players craft their plans – the way they make use of of the element of surprise, and how creatively they’ve mastered the skill of using their heroes’ quirky abilities.

Watching our players show off their deep understanding of the hero abilities is one of the most gratifying things for me.
Despite having played the title now, in its final form, for the past eighteen months, there are still seldom patterns within gameplay!"

"In just a few words: teams, teams, heroes and teams!
One of our future goals is to add a new hero every month.
Also, we’re working on team play. Soon, players will be able to invite friends to practice their defence and attack strategies with.

We’ll also add massive team wars where players collaborate on plans by lending out one of their heroes to assist a teammate’s plan, like "Hey guys, the teleport mage would really help out my plan. Does anyone have Ozzy? Let’s discuss the best way to utilise him!"

We’d also like to explore social mechanics for enabling alliances in the wars."

Have you any plans to bring the game to any other mobile platforms, such as Windows Phone, or Steam?

"There are no immediate plans for computer formats as we tried our beta there and feedback was very succinct: "This game works best with touch". We can’t argue with that!" 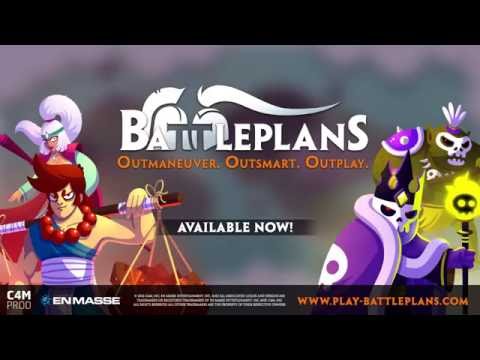 Available now, for free, from the App Store for iOS platforms.

Battleplans now available on Android with iOS update to boot