Let's get the obvious out of the way first. Badland is gorgeous. You'd be hard-pressed to find a better game to show off your Retina display, and while the silhouette style has been done before Badland adds its own distinctive spin.

What's less obvious, however, is what Badland actually is. Part endless-runner, part physics-puzzler, and part inverted platformer, there's a crisis of identity at the heart of the game that reveals itself through one glaring flaw - quite often you've got no idea whether what's happening is happening because of you.

The game sees you taking control of a cute black blob that looks a lot like an afro with wings. You're constantly moving from left to right, but pushing a finger on the screen makes the blob fly upwards, and releasing your finger lets it flob back down to the ground.

That's the extent of control you have in the game. It's up to you to work through a series of mazes filled with switches, boulders, spikes, and explosive things. There are power-ups littering the levels too, which help and hinder in equal measures.

Some glowing orange pills make you big, while others make you small. There are speed up and slow down pills; clone pills that burst into a series of identical versions of your blob; and yellow pills that make you bouncy or sticky.

Picking any of these up often leads to chaos, but it's rarely a chaos that you feel like you're part of. Blobs explode on the screen, squished by falling boulders as they race across a treacherous valley of fans, but all you did was tap the screen a couple of times.

Land of the constrained

That disjunction between what your fingers are doing and what's happening on the screen can sometimes be overwhelming. You'll finish a level but it doesn't feel like you've actually achieved anything.

It's a problem that's rife in the multiplayer, too. While pushing the screen with up to three other friends can make for some frantic and hilarious experiences, victories often feel hollow and undeserved.

Badland is a stunning-looking game, but the mechanics underneath all the glitter are a little too shallow, and the connection between you and the action a little too thin, to wholeheartedly recommend it. 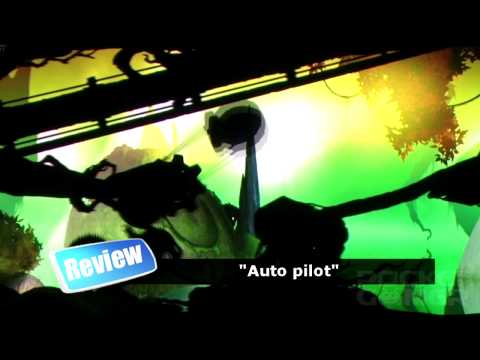 A gorgeous-looking game, Badland doesn't quite have the moves to make it a classic
Next Up :
Hero Emblems II review - "Lovely visuals and music, but match-3 combat lacks strategic depth"