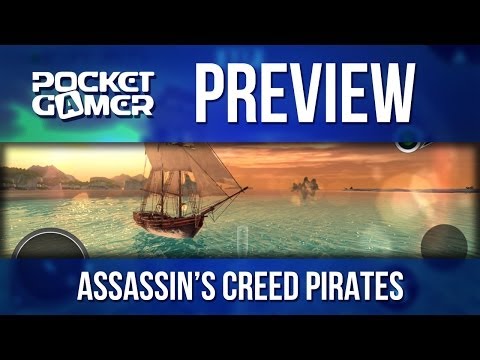 It's entirely possible to navigate the Caribbean oceans of Assassin's Creed Pirates - the iOS and Android spin-off to console game Black Flag - from a towering top-down view of the sea.

In this tactical view, the game almost plays like Flight Control. You'll pull your sea-faring schooner from mission to mission with your finger, and carefully tug your ship away from enemy fleets.

But that would do a disservice to the game. This pioneering, buccaneering pirate sim is at its best when you're behind the wheel. Where you can see the waves and whales crash in front of your brig. Where you can hear your crew break into a raucous sea shanty.

Mix that with some very handsome visuals and Assassin's Creed Pirates does a jolly good job of capturing the noble, majestic side of pirate life - while carefully leaving out the scurvy and wooden prosthetics and slavery and all the other nasty bits. 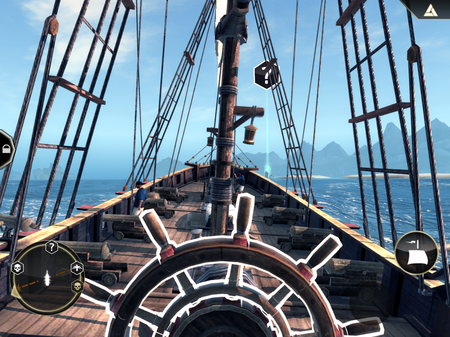 It's not all sailing and singing, though. You'll also get in ship-on-ship dogfights - maybe as part of a mission, maybe if an enemy ship spots you at sea, or maybe if you fancy taking down a neutral boat in search of loot and experience.

Whatever the case, combat alternates between a pair of basic mini-games. When you're attacking, you can fire a barrage of cannonballs or use a single, more accurate blast to attack a ship's weak point.

When you're defending you need to dodge enemy attacks with expert timing. It's like a very wet and windy version of Infinity Blade.

It's a fun and tense back-and-forth, and because it's not truly turn-based you can sometimes attack twice before your opponent can retaliate if you have good timing and planning. 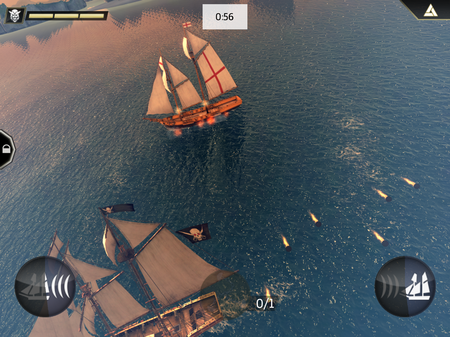 But it's also remarkably simple, shallow, and - especially as it's practically the only piece of action you'll see in the game - increasingly repetitive. Why can't pegleg enemies board my ship, and get into sword fighting face offs with my crew? Why can't I put out fires and bail out water?

Is a pirate ship version of indie spaceship simulator FTL too much to ask for? Maybe.

Other mission types include races - simple sailing challenges where you'll have to fiddle with your sails to avoid getting swept off into sea; stealth missions - which are played from the top-down tactical view; and collection chores. 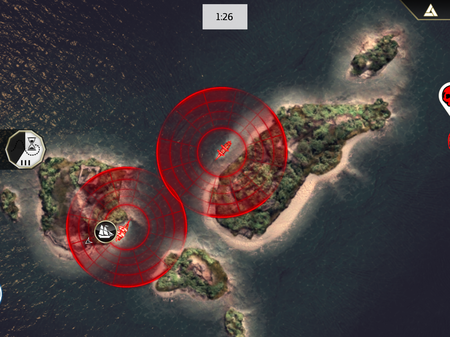 When you finish a mission you'll be rewarded with cash and different materials (there are no in-app purchases to get more - at least, not in the preview build provided by Ubisoft). That booty is spent recruiting new crew members, upgrading (or replacing) your ship, and upgrading perks.

Those perks are active and passive boosts that can make enemies move slower, or give you a speed boost, or let you pick up all the booty from a downed ship in a single tap. Handy little things, then.

You'll also find treasure and journal pages, which help fill out Assassin's Creed Pirates's basic story. There might be some links to the main Creed lore, and the events of Black Flag - but I can't keep up with that absurd, unwieldy plot any more. 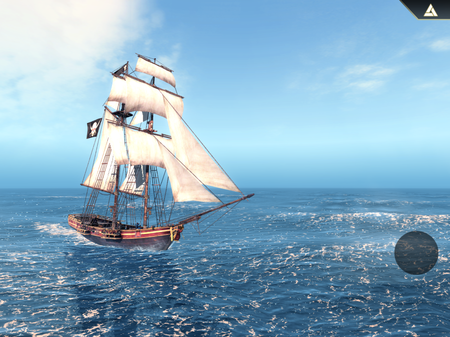 Playing Pirates can certainly be an epic, engrossing adventure. But it's also too simple and too repetitive to stick with for long sessions - ships control like giant cars with the wind magically always following behind your sails, and I could happily go my entire life without engaging in another identical ship battle.