Retro arcade shooter Contra is back with a vengeance in Contra Returns, the massively popular 1987 epic where you blast away aliens in all their pixelated glory. TiMi Studio Group is bringing the Konami classic to mobile platforms globally, and pre-registration starts now for both Android and iOS devices.

Contra Returns was first released in China way back in 2017, and in Taiwan in 2018. Now, in anticipation of its global release on July 26th, players can finally pre-register to get their hands on that old-school thrill of trigger-happy shooting with insane difficulty. Loyal fans of the franchise will be happy to know that it’s still the same side-scrolling madness it’s always been, buffed up with HD graphics and tons of new game modes. 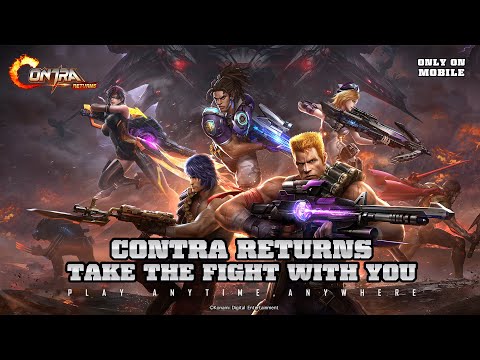 Featuring over 200 levels, the free-to-play title will introduce extra playable characters (six heroes in total) to help fight the good fight. We’re not entirely sure about loot boxes or how progression will go just yet, so here’s hoping it won’t be too pay-to-win. There will also be a real-time PvP mode either in 1v1 or 3v3, plus new weapons added to one of the longest-running titles ever. Childhood feels, anyone?

Contra Returns will be released as a free-to-play game with in-app purchases on the App Store and on Google Play. Pre-registering for the run-and-gun classic will reward you with tons of in-game goodies once the game officially launches. For now, you can feast your eyes on the teaser trailer embedded above where you can see two buff dudes prepping for battle and all the heavy machinery they’re packing. I got goosebumps just watching it (and hearing that iconic score), to be honest.

Looking for more action-packed shooters where you can fire away to your heart's content? Check out our list of the top 25 best shooters for Android phones and tablets!

Roblox: A few basic tips to help you with Anime Fighting Simulator

Contra Returns is finally out on iOS and Android, so fans of the classic run-and-gun franchise can now rest easy

No fair, only China is getting the new Contra game for iOS and Android