Enter the launch competition of Book of Beasts, a new card battling game from Gbanga

Win a full deck, or get rich trying

It was only a matter of time before collectible card games (CCGs) crossed from the physical world of foil-wrapped packs and competitive tournaments into the realm of mobile gaming. Now there are dozens of mobile CCGs to play, from big names such as Hearthstone to quirky indie affairs like Exploding Kittens. Soon, there will be a new addition: Book of Beasts.

Book of Beasts comes courtesy of Gbanga, a Zurich-based indie studio, and blends card collecting with tabletop-style battles. Like many mobile CCGs, Book of Beasts is based on a physical tabletop game, one devised and played by the developers. The mobile version retains the same accessible rules — no tomes of esoteric, headache-inducing tactics to memorise. Instead, it’s pick-up-and-play, with elegantly simple mechanics that still require strategic thinking to master. 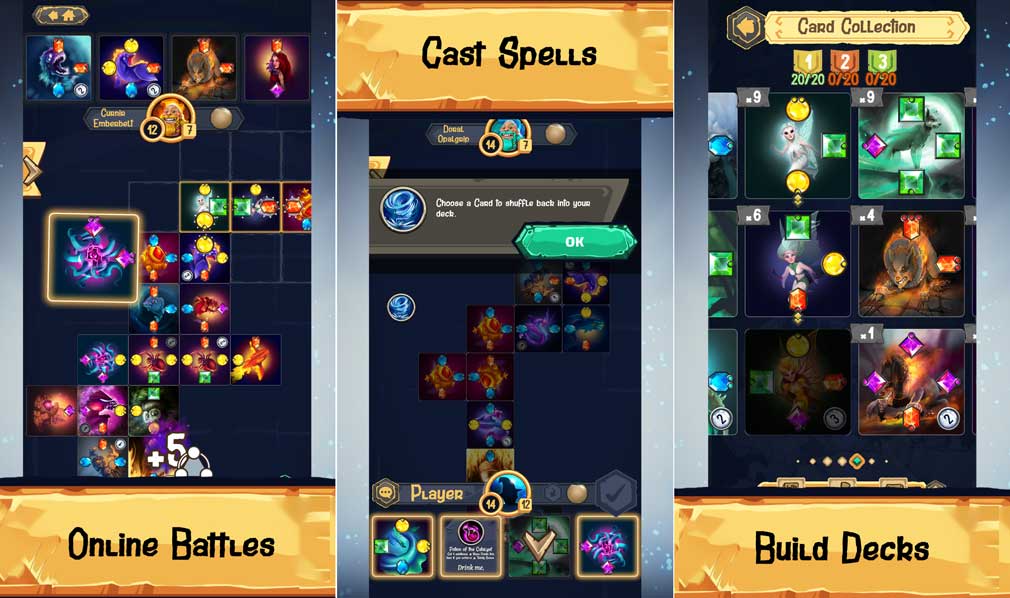 The game’s fantasy world is one of mythical creatures and magical spells, both of which form the main card types in your deck. Drawing from mythologies around the world, the beasts are as diverse as they are colourful, from golem-like hulks to delicate sprites. According to the lore, these beasts once roamed the land wreaking havoc and causing division, until they were slain by order of the ‘Good King’. Trying to summon any more is forbidden. Now, they exist only within two places: the Book of Beasts, and a card game popular among the common folk.

In PvP and PvE battles against fellow ’summoners’, you lay your cards like tiles on the battlefield, connecting them — somewhat akin to dominoes — based on the matching elemental gems on their edges. How you link cards together determines how effective your move is. On top of that, you can intercept an opponent’s card by blocking its edge with your own… it’s a tabletop game where you can turn the tables.

Following the launch of a playable demo in October, Book of Beasts is now slated for release on 18 November 2020. In celebration, Gbanga is giving you the chance to start the game with a full set of cards, or at the very least a stash of gold. All you need to do is submit your email address via this official link, and you’ll be entered into a raffle to win the complete catalogue of 51 beast cards and 13 spell cards. Just by entering, you’ll receive 10,000 gold coins, enough in-game currency to buy you up to 20 new cards. It’s the perfect way to strengthen your opening hand — before the game’s even out.

For tips, news and more ahead of release, visit the official Book of Beasts website: playbookofbeasts.com.