Last week we reported on how Bridge Constructor: The Walking Dead was collaborating with Canadian YouTuber Kenny “Drae” to promote a few of the game’s early levels. There was no release date set at the time, but the fact they were marketing this so heavily implied it was coming very soon. It’s now been announced that the game will release for all platforms, iOS and Android included, on 19th November.

The Bridge Constructor series has been going since 2011, and has always featured the same sort of gameplay but with different themes over the years. At its core, it’s about creating bridges between two points using a limited number of structural parts, and you have to ensure it’s sturdy enough to take the weight of your vehicle that’s crossing over.

Bridge Constructor: The Walking Dead utilises the same kind of gameplay, except now you have walker hordes (those are zombies for anyone not in the know) to deal with, and you’ll get bonus points for wiping out these masses. There seems to be a lot of variation in how this can occur, too. 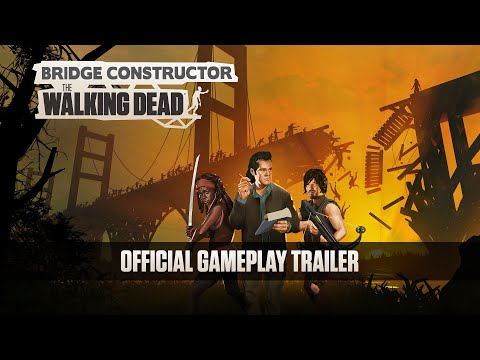 This one also features characters from the critically acclaimed TV series, including Daryl, Michonne and Eugene, and it also includes levels in which you’re using the bridge construction tools to help the survivors clear the area of any walkers.

Bridge: Constructor: The Walking Dead features numerous brain-teasing levels filled with countless brain-eating walkers, elaborate constructions and lethal traps, as well as brutally funny ragdoll physics. It’s coming to iOS and Android next week on 19th November, and will be a premium title to purchase, but we have no idea of how much it’ll cost just yet. For now, keep an eye on the official website for when the store pages go live and you’ll be able to buy.

Read more about our favourite puzzle games to play on iPhone and iPad.

All new and leaving fish, bugs, and sea creatures in February in Animal Crossing: New Horizons

App Army Assemble: Bridge Constructor: The Walking Dead - How does the latest entry in the popular puzzle series compare to its predecessors?