Glide through this neon-soaked city

Cyberpunk is understandably very in at the moment with a host of people looking forward to Cyberpunk 2077. So it was inevitable that would feed over to mobile games too. Neon Flytron is the latest mobile game to sport the aesthetic and it is available now for Android in Early Access.

Developer Mobyzay discussed the game's release in a recent Reddit thread where they explained that they had been working on the game on and off for three years. With Neon Flytreon eventually reaching a suitably playable state Mobyzay decided to release it in Early Access.

As a mark for a cyberpunk aesthetic, I think this game looks great and you definitely get some Blade Runner vibes in the art style, which the developer has unsurprisingly listed as an inspiration. Looks aren't everything though, so what is the game itself all about?

Well, it's an endless runner, or driver in this case that's entirely controlled with one finger. You'll be dodging your way through traffic, moving bridges and swerving to avoid trains and needlessly large fans. There are shields you'll be able to pick up along the way that will give you some added protection from the hazards that can be found in this neon city. 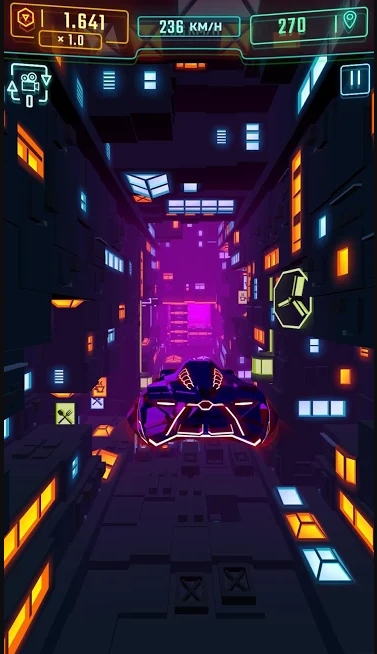 There will be multiple flying cars to unlock as you continue to play Neon Flytron more and earn in-game currency through completing challenges, simply playing the game or buying them with real-life cash. Beyond that, there is also customisation for each individual car, at least in terms of its paintwork, with an extensive colour wheel system in place to personalise your ride.

Neon Flytron is available now in Early Access over on Google Play. It's a free-to-play game with in-app purchases.

Looking for other auto-runner games to pass the time? Here are 25 of the best that are available right now for Android
SEE COMMENTS