Help an amnesiac remember the past in Rusty Lake's latest

The White Door is the latest atmospheric point-and-click mystery from acclaimed developer Rusty Lake and co-publisher Second Maze. I first covered it back in August of last year, and I've been looking forward to it since catching the initial trailer and screenshots.

It sees you playing as amnesiac Robert Hill, who wakes up in a mysterious mental health facility where something seems deeply off. You'll deal with the facility's strict daily routine and slowly unravel the past by exploring Robert's vivid dreams. 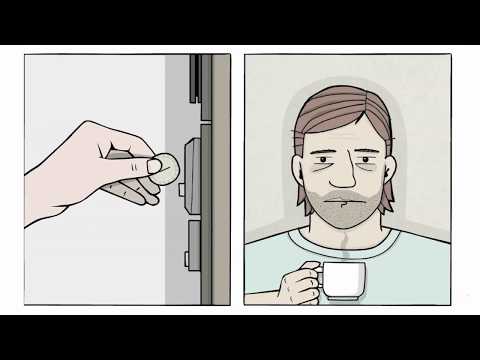 The White Door makes use of a neat split-screen perspective to tell its tale and offer a novel gameplay dynamic. Several examples of this can be seen in the trailer, with multiple angles shown of Robert exercising,  brushing his teeth, and briefly turning into a creature with glowing eyes.

Each day is filled with riddles to solve and puzzles to overcome, though it's said to be fairly easy to get into, meaning you shouldn't expect extreme difficulty.

User reviews have so far been overwhelmingly positive, with players praising the atmosphere, story, and presentation – three areas Rusty Lake has excelled at in the past. The White Door looks to be a slight departure for the developer, especially in the visual department, but it's good to hear that it remains consistent with its predecessors in terms of quality.

We've covered several of Rusty Lake's games in the past, with Jon reviewing 2018's Cube Escape: Paradox quite favourably, saying "it's compellingly atmospheric stuff, yet its puzzles are often frustratingly tangential", before awarding it a bronze rating.

The team is arguably best known for its work on the Rusty Lake series, the latest entry of which, Rusty Lake: Paradise, Ex-Ed Ric reviewed at launch. He found its setting lacked substance and puzzles veered towards being frustrating, though clarified that fans of the series would still find much to like.

If you're interested in unravelling its many mysteries, you'll find The White Door available for download now from both the App Store and Google Play.