From the makers of Cube Escape: Paradox

The White Door is an intriguing point-and-click mystery from beloved developer (now publisher) Rusty Lake. It sees you playing as a mental health patient called Robert Hill. At the start of the game, poor Robert is suffering from severe memory loss. Mobile Mode Gaming reports that the game takes place in a mental health facility, and sees you exploring Robert’s dreams to unlock his past.

Rusty Lake’s output remains one of the most consistently interesting in all of mobile gaming. It specialises in weird, disquieting, often unique experiences that I’m glad have managed to find a sizeable audience. It’s probably best known for its Cube Escape series, the latest entry of which – Cube Escape: Paradox – we reviewed late last year. 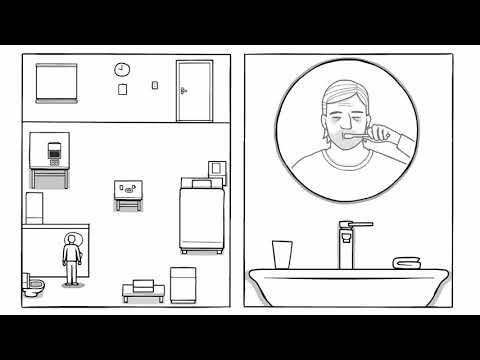 Earlier this year, the entire Rusty Lake series was pulled from the App Store due to being flagged as spam by an automated system. Thankfully, the issue was sorted quickly, but it does pose questions about the reliability of Apple’s quality control processes. Very odd.

The White Door, which is reportedly set to launch later in the year on PC, looks like a slight departure for the developer, boasting (in most scenes) a striking black and white art style and a split-screen perspective. It’ll be used in a variety of ways, showing you two different angles of the same scene. Several examples of this are highlighted in the trailer, including multiple angles of Robert brushing his teeth, eating breakfast, or being visited by a figure with glowing eyes.

I’m looking forward to unravelling The White Door’s many mysteries when it comes to iOS and Android following its PC launch later this year. In the meantime, you could check out any of the Rusty Lake entries or the aforementioned Cube Escape: Paradox. Be sure to do your research before going in, though; these games are absolutely not for everyone.