Right up to Bubble Bobble 4 Friends on Switch

November 2019 has seen the release of a new Switch game that updates a beloved Japanese classic. The game grants you control of cute fantastical creatures with exotic powers, and boasts a compelling core gameplay loop that's scarcely changed in decades.

No, I'm not talking about Pokemon Sword and Shield. Phooey to that overblown game of Top Trumps. I'm talking about Bubble Bobble 4 Friends.

Maybe you haven't heard of Bubble Bobble before. Just as likely is that you've vaguely heard of it, but paid it little attention. Maybe you remember playing Puzzle Bobble (aka Bust-a-Move), a casual puzzler spin-off.

While the series hasn't always hit the peaks of the all-time classics, though, the sheer majesty of the original - not to mention how fun and tidy the new Bubble Bobble 4 Friends is - warrants some kind of tribute.

Here, then, is a brief potted history of this adorable series, with a particular emphasis on how you've been able to play these games (officially) on the go. Click on the button below the trailer to get started.

Bubble Bobble first hit arcades in August 1986, and has since been converted to countless formats - including the Game Boy and the Game Gear. GBA owners got a jazzed up port (Bubble Bobble Old & New) in 2003, while Switch owners can play the game as part of the new Bubble Bobble 4 Friends.

It was even possible to play a version on iOS back in 2010, with Bubble Bobble Double including the original plus a weird touchscreen-driven mini-game.

What's remarkable about Bubble Bobble is that it remains eminently playable today, and not merely as some retro curio. That's largely down to its simple yet deceptively sophisticated mechanics.

This is a single-screen platformer that requires you to clear out enemies as quickly as possible. But the bubble blowing system through which you do so really distinguishes Bubble Bobble from its arcade contemporaries.

By blowing bubbles, Bub and Bob (depending on whether you're playing 1P or 2P) can capture and neutralise enemies. These bubble-prisons then need to be popped before the enemy escapes in enraged form. You can also bounce on top of your bubbles to reach higher levels, or the glorious variety of food items that spew out when you defeat enemies.

A whole bunch of power-ups and creative bubbles (pop the water ones to ride down the levels like a log flume) add further interest. Oh, and the game's famous ditty will. Not. Escape. Your. Head. Ever. 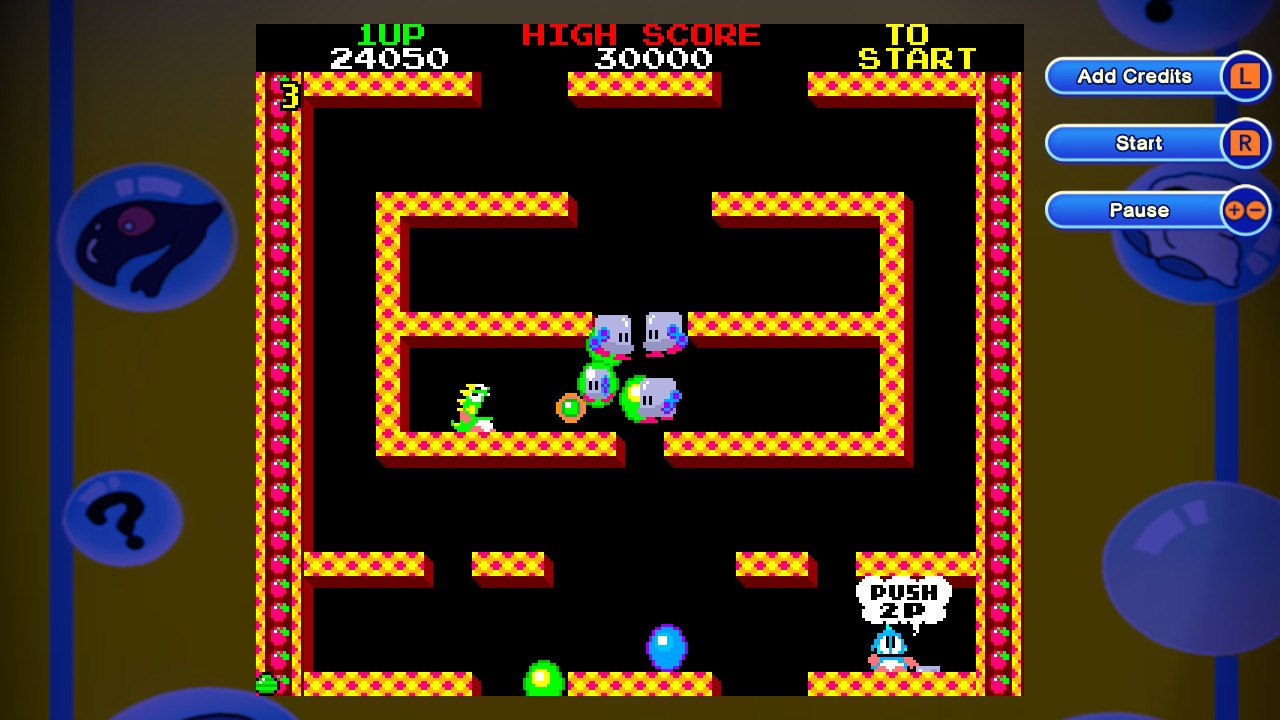 How do you follow up one of the most beloved 2P co-op arcade games of all time? With two sequels that bear absolutely no resemblance to the original, of course!

You have to hand it to Taito for having the balls to rip up the formula not once but twice with Rainbow Islands (1987) and Parasol Stars (1991). Not only did these games play completely differently from Bubble Bobble, but the two cute dragon leads reverted to their decidedly less cute human form for both.

Rainbow Islands was a pretty big deal back in the day, especially with its popular home computer ports. This vertically scrolling platform-climber saw the introduction of a rainbow-tossing mechanic that was as fresh and nuanced as the original's bubble blowing.

If you've got a Game Boy Color or a WonderSwan, you might still be able to track down a portable copy today on eBay.

The first non-arcade entry, Parasol Stars captured a little more of that single-screen Bubble Bobble magic. It came with an interesting multi-purpose umbrella that could block, attack, throw, and enable your character to float.

Still got your old Game Boy? Then it shouldn't be too hard to track down a portable copy - though of course it won't be the optimal version.

Following Parasol Stars, Taito launched a string of ostensibly more faithful follow-ups to Bubble Bobble. Let's run through a few of the most notable portable versions.

It's worth noting that this period also saw a couple of true, pure-bred Bubble Bobble follow-ups that really captured the zippy arcade vibrancy of the original. Sadly, Bubble Symphony (1994) and Bubble Memories (1996) never found their way to portable platforms.

We might have picketted Taito/Square Enix (Taito's current owner) for an eShop re-release were it not for our final entry.

All of which brings us to today and the fresh release of Bubble Bobble 4 Friends on Switch. This is a completely new game, yet it wisely gets back to the core magic that defined the original some 33 years ago.

We're talking single-screen levels, cute dinosaurs, enemies that bounce around in various patterns, and at the heart of it that ingenious multi-functional bubble-blowing mechanic.

As the name suggests, four players can now join the fray in local co-op. I'm already eyeing up the potential for some glorious couch co-op this Christmas and New Year's.

The graphics have been modernised with sharp 3D models, and it all moves along smoothly with a suitably fluid frame rate. It's perhaps not the most generously proportioned game on the eShop, but crucially Bubble Bobble 4 Friends gets the glorious bubble-popping basics right.

And as I've already mentioned, the original Bubble Bobble has been included as part of the package. 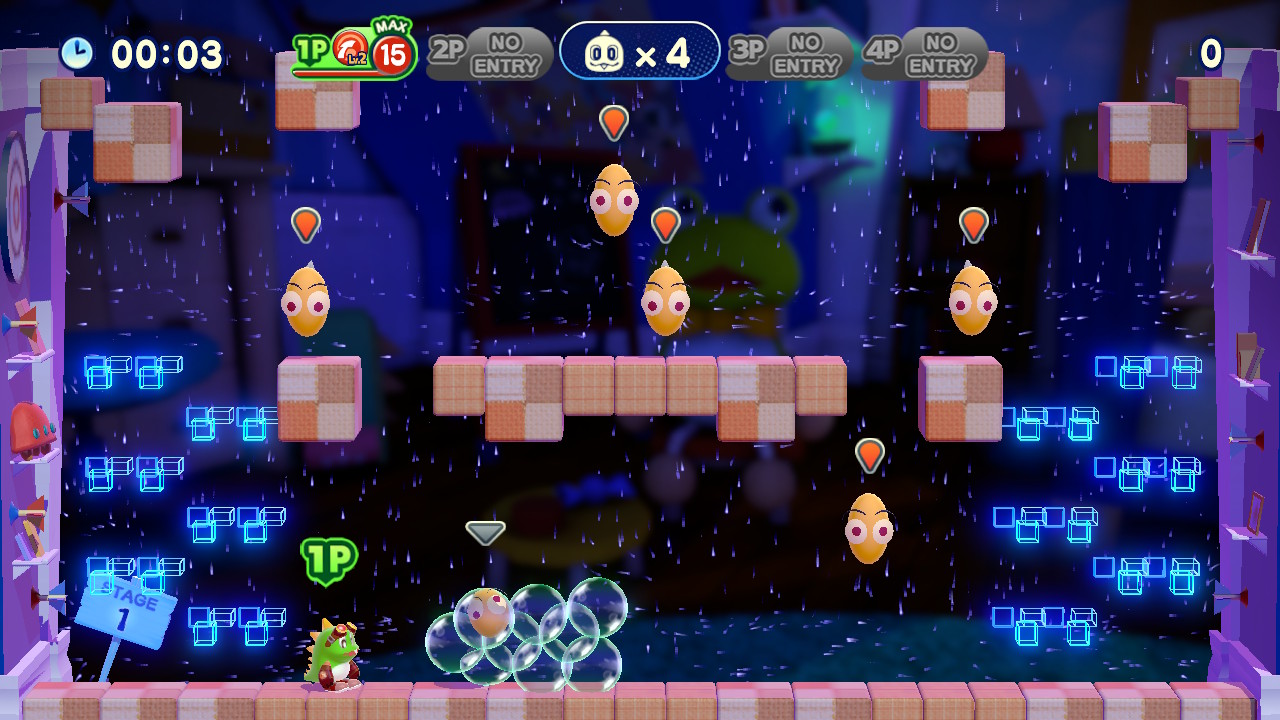