Super Smash Bros. Ultimate, in his divine wisdom. Bless you, Sakurai-san, for giving us this gift.

Now, usually I would wax lyrical about Terry Bogard and his series Fatal Frame here, but there's so much to talk about with Terry that I'm going to skip it entirely.

Here's what you need to know: like Ryu and Ken, Terry Bogard is a traditional fighting game character, as such, he doesn't play much like the rest of the cast, and even his stage is very different. 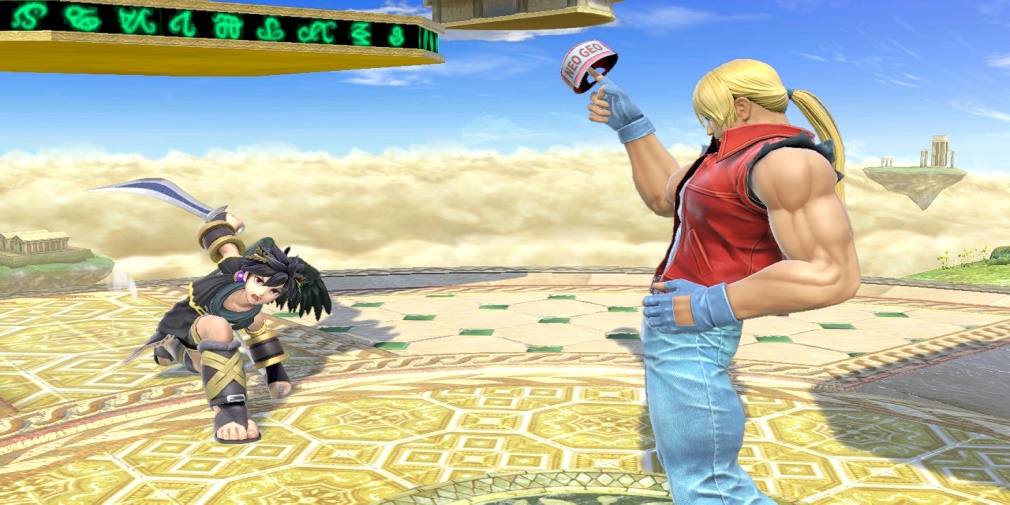 Okay, so like Ryu and Ken, Terry plays a bit more like a traditional fighting game character. For example, in 1v1 fights, Terry will always turn to stand and face his opponent - which is fantastic when trying to catch your opponent's rolls or movements with a down tilt.

He can also cancel his attack animations into special attacks - again, like Ryu and Ken - but unlike the pair from Street Fighter, Fatal Fury's Terry has a far more varied set of special moves.

Terry is fast, and he has large hitboxes on all of his specials and normals, making it easy to connect with opponents - and canceling animations into special attacks is so simple that you'll probably do it accidentally a few times while trying to adjust to him.

He's just super versatile, and his recovery options are decent, while not incredible. The traditional fighting game characters in Super Smash Bros. Ultimate are absolutely more suited to stamina battles as opposed to Smash's standard ruleset, but that doesn't mean you shouldn't be taking Terry online and beating people down, because he's incredibly strong, and makes for a challenging opponent.

Terry definitely feels like the easiest of the "traditional" fighting game cast to pick and play instantly, while also having plenty of nuance and strength to his attacks, which elevates him far above a beginner character. It's absolutely worth playing Terry to discover his strength, and also start understanding how you can fight against him.

Terry's normal attacks are pretty much as basic as you can get. A neutral air with a tiny hitbox, a decent forward air, a back air mimicking Ken and Ryu's, and a down air again familiar to the Street Fighter team, a spiking downwards punch. His up air is new at least, a somersault kick. All of these are pretty basic, but of course, get more interesting when canceled into a special move.

Honestly, even smash attacks and tilts are pretty, um, typical. There's nothing particularly of note here, other than that, as mentioned, him facing opponents in 1v1 situations makes it easier to connect tilts when an opponent is moving around you. In addition to that, his up tilt can hit targets standing on platforms on Battlefield-style stages.

I wish I could say more about it, but honestly, everything he has in terms of normal moves are fine and functional, but not remarkable. It's only when special cancels get involved he gets interesting.

Here we go. His special move are pretty darn cool, and have a lot of utility. Check out this handy graphic from twitter user LocusSK for the information you need on how to perform specials.

A lot of people have been asking about Terry's input moves, so here's a graphic to help clarify which ones do what, and how to do each of the inputs! Share around to help others out :) pic.twitter.com/KXVPawJcd8— Locus Bogard (@LocusSK) November 6, 2019

His recovery up special is Rising Tackle, and when grounded you can crouch for a few seconds to build up power and unleash and invincible variation on the move. His Power Wave neutral special travels along the ground, or has a short burst when used in the air.

His other specials can be activated using inputs like Ken and Ryu to make them more powerful, or just activated normally. Forward special, or quarter circle forward (QCF) is Burning Knuckle, a powerful punch which pushes Terry forward.

Back special, quarter circle back (QCB) activates Crack Shoot, a big sweeping aerial kick which again pushes Terry forward. It feels similar to Shiek's down special, in some ways, but with a constant hitbox. You can use this to recover horizontally, too.

Down special is Power Dunk, which can be activated with the Shoryuken motion. This shoots Terry into the air, catching opponents with him, and plunges down to the ground. Very strong and cool, but can also cause a self-destruct if you're not careful.

All of these moves can be canceled into from a tilt, aerial, or jab attack, meaning Terry can become incredibly vicious even when he catches you with a fairly weak neutral air.

Terry also has a few super special move, in addition to his Final Smash. When Terry is low on health he has a Go icon appear near his character portrait, indicating that he can use his super special attacks.

He has Power Geyser, which is activated with a QCB into half circle forward motion. If this is tricky, just try to roll your analog stick from the down position, to back, and then rolling it all the way down and to the forward position. This is a super strong, cool move.

Buster Wolf is activated with a double QCF, which is much easier to activate at least, and is again very flashy. These super special attacks will only be available when Terry is on his last legs, but they do more than enough damage to make them worthwhile. Just make sure your opponent doesn't block them…