Four years after the iOS release

Happy Wheels is finally heading to Android devices after being available on iOS since 2015. You can sign up to be part of the beta for the physics-based obstacle game by filling in the application form.

Happy Wheels has always been a supremely popular game. It was made famous by several high-profile YouTubers like Markiplier and Jacksepticeye making a plethora of videos featuring them losing their minds/overacting as they hurtled through various courses. The needless levels of violence alongside the crazy physics seem to really take hold of audiences earlier this decade and it's undoubtedly one of the earliest examples of a 'YouTube' game.

The App Store version of Happy Wheels has over 60 levels to tackle featuring various oddball characters such as an irresponsible dad who tears around on a bicycle with his son questionably sat in a baby seat without being properly secured into it. It also has a level editor so players can create their own physics-based obstacle course madness. 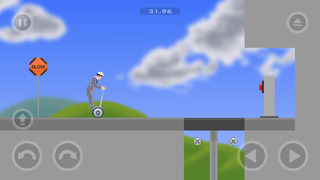 You can also upload the levels you've created so that you can play other people's creations, which gives Happy Wheels an awful lot of content. Though obviously the quality will vary as it often does with user submitted levels.

So we can probably expect all of this to be available when the game makes its way over to Android devices. Which of these features will be available in the beta however, aren't known at the moment. The iOS version has also been regularly updated since its initial release, though it hasn't received any new content in over a year now.

Happy Wheels will eventually be available via Google Play but you can apply to be part of the beta by filling in the Google Form application. If you're an Apple user then you can grab Happy Wheels on the App Store. It's a free-to-play game with in-app purchases.

STONE, the stoner noir adventure game, gets a free-to-play preview on iOS