In fiction, bartenders appear to be some kind of mythical listener, an open-eared stranger who will absorb your life's troubles and give you sage advice, all while plying you with their finest liquors.

VA-11 HALL-A put you in the shoes of one such bartender, Jill, who mixes drinks and listens to the woes of the varied patrons who frequent the titular bar.

It is a brilliantly clever visual novel with natural dialogue and a genuine feeling of normality and reality despite its cyberpunk setting, and it's a fantastic entry point into a genre that can be quite off-putting to some gaming fans.

There's no real story in VA-11 HALL-A per se - instead, there are various plot threads which are picked up and dropped at appropriate times, leaving you to piece it all together afterwards. 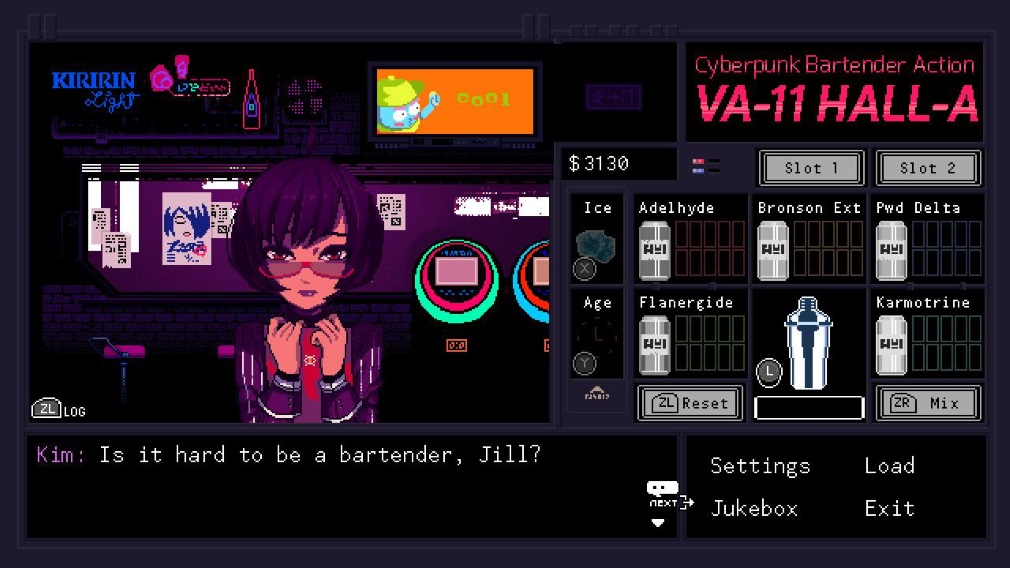 It's less about an overarching narrative and more about the characters within the world. Each has a multitude of stories to tell, some of which are just insights into their character, and others which explain more about the world outside the bar.

The writing is sublime, with some of the character histories and backstories becoming more interesting than the trials and tribulations they're facing at a given point.

And with current events threatening to change the very fabric of the universe in which you're playing, it takes quite some doing to make the smaller, character-focused moments so engaging.

When you're not talking to patrons, you need to mix them drinks. You have a recipe book available to you at all times, and customers tend to have incredibly specific orders, right down to the name of the drink.

You'll sometimes need to remember minor details, like a certain patron's favourite drink, or tiny, missable trivia about a certain drink, in order to match the more cryptic orders, which adds in a very light puzzle element to proceedings.

But messing up a drink order isn't the end of the world or the story, and mixing drinks is incredibly easy. Give it a few hours, and you'll be chucking together a Sugar Rush with your eyes closed.

Get your orders right and you'll earn more cash, which is necessary for staying alive. The end of each in-game week brings an enormous bill to pay, and missing your payments can have catastrophic effects.

As can not buying things Jill desires. Failing to fulfill Jill's material needs at certain points leads to her getting distracted during work, which means you lose out on a valuable hint system that keeps a patron's order on the screen while you're making it. 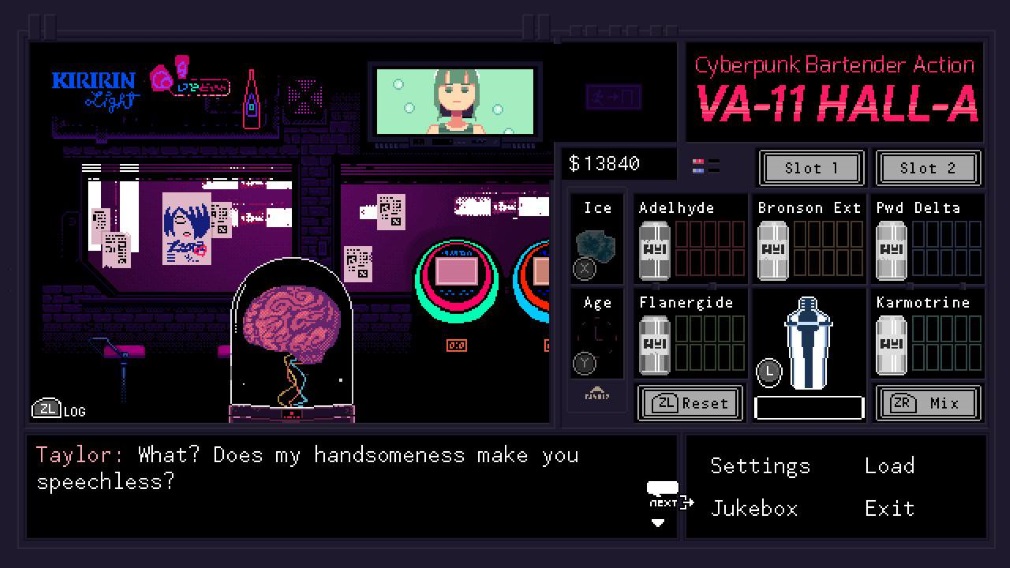 You will, at times, need to make the trade-off to survive. And while it's only a small complication in the grand scheme of things, it does add some much needed tension to the game.

There are other hidden elements as well, which lead to small appearances from characters from another game and unlocking special endings once the story is finished. But you can easily bumble through the game during its 8-or-so hour runtime and not miss anything vitally important.

And you'll speed through that time before you're aware of it. VA-11 HALL-A has the ability to totally enrapture you with its characters, writing, and setting, and you'll want to see everything it has to offer, even if it takes multiple playthroughs.

There's something wonderfully human about its naturalistic dialogue, despite the cyberpunk aesthetic that oozes out of every corner.

If you've never played a visual novel and want a good starting point, this is the one. And if you're a visual novel fan, you're definitely going to love this.

VA-11 HALL-A is a fascinating visual novel which deftly weaves realistic dialogue and a cyberpunk aesthetic into a magnificent tale
By Ric Cowley
| Apr 29, 2019 |
Switch
Find out more about VA-11 HALL-A
SEE COMMENTS