If you remember anything about Katamari Damacy from its original release, you might think of words like 'weird', 'wacky', or 'bizarre' when describing the game. As bonkers as it was, these were traits that made a generation fall in love with it.

Katamari Demacy Reroll brings back that experience for modern players and with it a crisper aesthetic and tighter framerate. Is it bananas? Yes. Does it make any sense? No, but it doesn't matter in the least. You're rolling up all sorts of goodies in a nonsensical manner and having a blast while doing it.

In Katamari Demacy Reroll you play as an unfortunate, telescope-headed prince who has to clean up after dear ol' dad, King of All Cosmos, wipes out the stars. In order to fill up the night sky again, you need to roll up whatever you can around Earth and shoot it on up there.

When I say everything, I mean everything. Paperclips, dishes, carrots, tulips, cats, mice, sparrows, eggs, dominoes, RC cars, people, you name it – however big King of All Cosmos wants you to make your makeshift star, you need to meet the requirements or face his wrath. 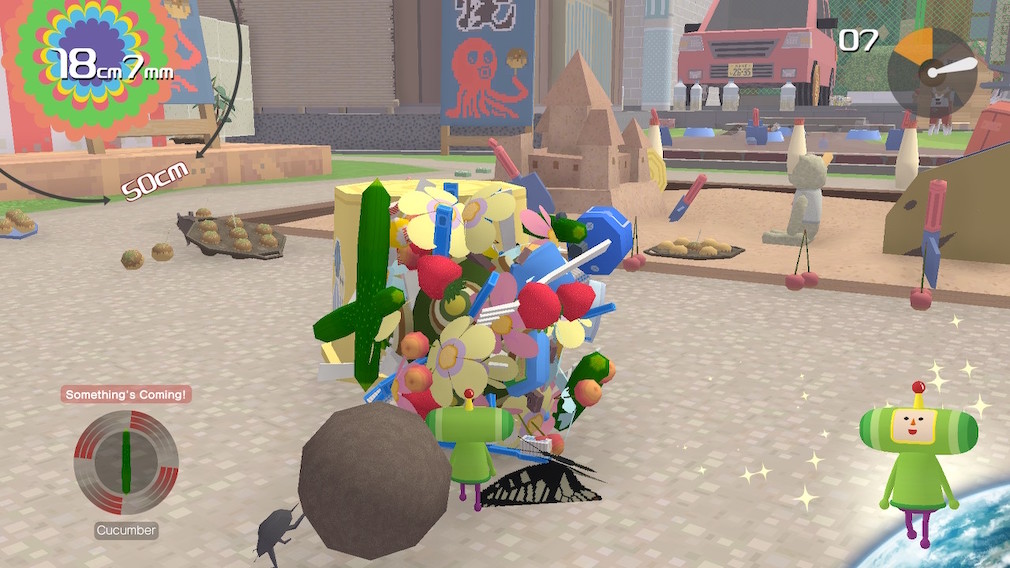 You can't just roll things up willy-nilly, however. No, you need to think about size to begin with, starting off with smaller objects before working your way up to larger items. If you try to snap up something too big for your ball you might end up losing a few bits from your collection in the meantime. The same goes if you run into walls or immovable objects.

Physics play an important part in the game, making the ball easier or harder to roll depending on what you've picked up. Rolling over some chopsticks or other long, cylindrical objects, for example, causes you to limp along and work harder to move.

All in all, the whole thing is utterly daft. From its adorable visual style to its ultra-aware and frustratingly catchy accompanying music, it's dripping in charm.

Some of you might find the controls a bit much to handle, especially if this is your first time with the series. You move by pushing the sticks forward, stop by pulling them back, turn by alternating directions, and so on. On paper it sounds simple, but in practice it's pretty tricky to get your head around it, especially turning.

This all fades after a good few levels, however. Once the items start getting bigger and easier to pick up, the experience moves from frustrating to fun and somewhat peaceful. 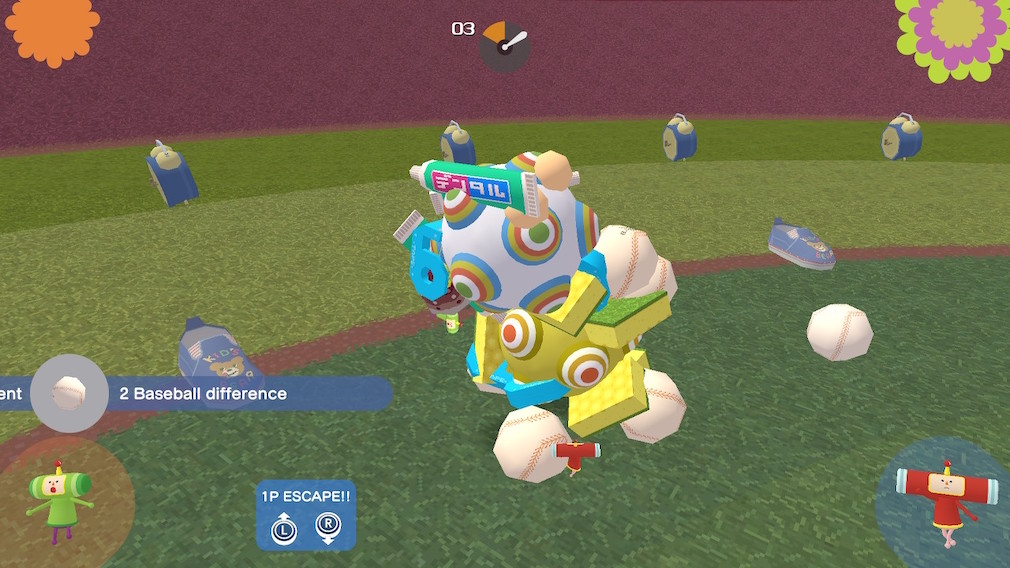 As well as its 'star' mode there are a bunch of different modes to muck about with, including local multiplayer mode for two people. Here, you have to go head-to-head against a pal in the same room and get the biggest ball to be named the rightful prince. You can even roll each other up if one ball is bigger than the other.

Katamari Damacy Reroll is an excellent and faithful remaster of an utterly mad game, and it's a ball to play. Not everyone will get on with it, especially if you don't have the patience for getting the hang of its controls, but it's good fun and hasn't left anything behind in the process.

Even if it's your first time with Katamari Demacy, REROLL offers up the perfect chance to play something that's daft, charming, and, overall, fun
By Emily Sowden
| Dec 18, 2018 |
Switch
Find out more about Katamari Damacy Reroll

Katamari Damacy rolls its way onto the Switch this Winter