Alphaputt review - "A golf game that's so much better in multiplayer"

By Harry Slater
| Nov 9, 2018
iOS
|
Alphaputt
Get Alphaputt on...
Find out more about Alphaputt
Available on: iOS

When we first heard about Alphaputt we got pretty excited. Mainly because here at Pocket Gamer we have a soft spot for word games and an affinity with golf of the crazy variety. It felt like this might be a match made in slightly bonkers heaven.

The end result though is a bit of a mixed bag. There's not so much wordplay here, and the putting while solid isn't as interesting as we hoped it might be. There's fun to be had, but there are better golf games and better word games out there that are more deserving of your attention.

Each level in the game is a letter, and each letter is its own little challenge. The A, for example, is an airport with a plane landing and taking off. L is a rollercoaster with a loop-de-loop and a number of cars careening around the gap-filled track.

They're all presented beautifully, with each letter having its own unique set of colours and lighting. You can either play through them all, one after the other, or choose a word to play. If you play all 26 holes, you're playing on your own though.

There's pass-and-play multiplayer here, which is the game's real saving grace. Players take it in turns to take a shot, but their ball remains when the next people have their go. That can lead to some really great matches where you need to decide whether to go for a hard shot or try and smash your opponent into a difficult position. 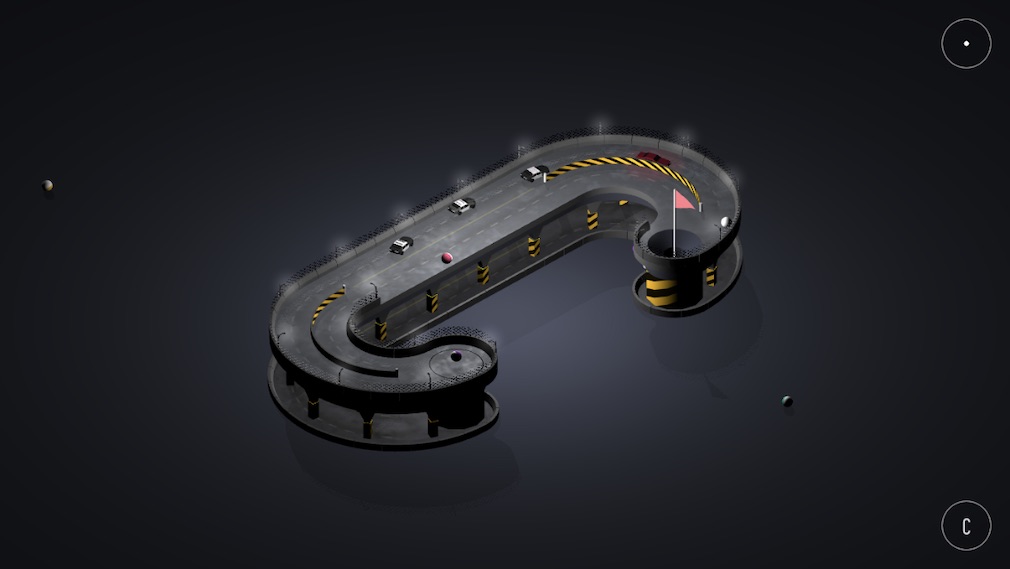 Really the multiplayer is the heart of the experience. While it's interesting enough putting through the letters, in the end it's just practice for when it's time to battle against your friends. Learn the courses and you're going to be in the best position to win.

The excitement of the multiplayer just isn't there though. The levels are designed to make your shots difficult, and when you're playing on your own that can get frustrating. When you're playing with other people their frustration can turn into opportunities for you, and that makes the whole thing so much more entertaining.

Alphaputt is really well put together, and the simple slide controls mean that anyone can figure out what it is they're supposed to do. But if you're looking for something to play on your own, there are definitely better options out there.

That's a real shame, because the level of polish here is undeniable, and the multiplayer component is one of the best we've seen in a while. Getting this for a gaming night with your friends? Then you're going to have a ball.

Getting it to play on your own on a long journey? Then you should definitely consider picking up something like Golfing Around instead.

A great multiplayer mode doesn't quite make up for Alphaputt's disappointing single player
By Harry Slater
| Nov 9, 2018 |
iOS
Find out more about Alphaputt

Slydris 2 is finally on the way to iPhone and iPad

App Army Assembles - Is Alphaputt a swing or a miss?