All the games from our Develop:Brighton Big Indie Pitch

Develop:Brighton 2018 is almost a distant memory these days, but we still remember the games we played at the Big Indie Pitch held during the event vividly.

In particular, we remember overall winner Skybolt Zack, a magnificent display of rhythm-violence which has you wrecking robots and keeping your own beat to rack up huge points and unlock new areas. Think Sonic the Hedgehog crossed with Rock Band and you're halfway there.

Overall we saw 14 games at the event, and if you hit the link below you can find out about every single one of them and see what they're like for yourself. And we suggest you do! Get clicking!

A dazzling mix of Sonic the Hedgehog and Guitar Hero (no, really), Skybolt Jack has you zipping around tightly designed levels destroying everything in your path with a devastating lock-on attack.

It's fun, fast-paced, and tricky to master, but offers up multiple routes to go through depending on how good you are - a perfect incentive for going back when you're a bit better at the game.

Oco is a beautifully simple one-touch puzzle game in which you need to jump over obstacles and collect dots to complete your objective.

But it gets way, way more complex than that, very quickly. Better yet, you can design your own levels for the game, adding endless replayability and the chance to show off your skills.

PaperLander is sort of like Lunar Lander, except everything's made out of paper. Oh, and it's played in VR. That's pretty important too.

There's a whole load of fiendish physics-based puzzles to solve, and gorgeous art to take in as you try to solve them. Just take some time to get your eyes used to it all, yeah?

KamiDrop is an ambitious idea - you're not just collecting animals for use in one game, but across a wide range of games to be launched in the future.

The first game is a simple endless faller - think an endless runner, except with falling instead of running. It also features a wealth of cute creatures to collect, which is definitely a good thing.

Revaround is sort of like if Rocket League had reuseable grappling hooks and you played Pong with the ball. Kind of.

It's a little hard to describe, but to play it's seriously good fun - a joyful, silly experience of smacking your friends around with a huge ball and trying to break blocks too.

That's right two #gamedev announcements in two days, the last developer announcement for August is the fantastic @huey_games with their brand new game Revaround. We're so glad to see what this talented team have been up to and can't wait to play. Event:https://t.co/L22TaoLeTv pic.twitter.com/06TLOC8qrD— MancGamers (@MancGamers) August 28, 2018

Balls is both the name of the game and something you'll be saying when you inevitably mess up.

It's your job to keep a ball bouncing in the air for as long as possible, all while avoiding obstacles which spawn in from above. Go for that high score!

You need to defend your castle. How do you do it? Through rhythm-action gameplay, of course.

Enemies of various colours come streaming down the path at you, and you need to smack them away in time with the beat being drummed out around you. It's like if Rock Band involved way more violence.

Skateboarding is plenty cool, but what about if you were also trying to dig into a huge conspiracy? Now that's truly radical.

Rail Warriors is just that - with 32 levels to traverse and a deep story to uncover as you go through them. Plus multiple characters to play as, which you can see some concept art for below. 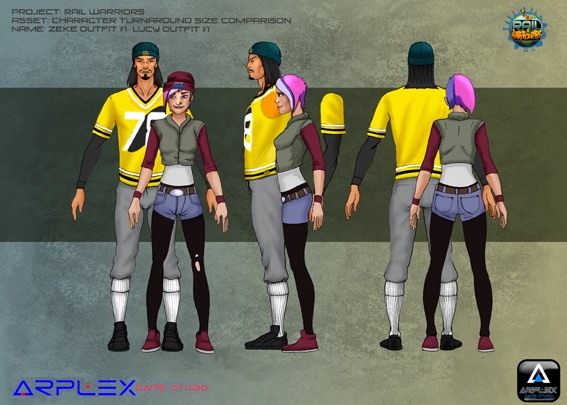 Enemies to the left of you. Enemies to the right. And here you are, stuck in the middle. Beating the heck out of everyone, of course.

Tap on the right side of the screen to knock back enemies on that side, and on the left to defeat foes on the other. It's simple, silly, and a nice distraction for a few minutes.

With a vibe of "Splatoon but with otters", The Otterman Empire is a third-person shooter which sees you and up to three friends battling it out on the same screen to rack up kills and reign supreme as the top otter.

There's weapons to pick up, rivers to dive into to charge your ammo, and some pretty impressive plans for a ton of free DLC to keep players coming back for more in the future.

Simple, fast, and bloody tough. Those are the three things just about anyone would say to describe Switch 'n' Shoot.

You've got one button which controls both shooting and switching the direction your ship moves. You're constantly running across the bottom of the screen, trying to destroy ships as they come down from the top. You'll die. A lot. But gosh it's fun.

Hey, didn't this guy make the last game? Well, no worries, this one's a lot different - it's a turn-based strategy dodgeball game, for starters.

Move around the grid, push back enemies, and try to get to the end of the arena. It's a fairly simple set-up, but it's pretty darned entertaining and a bit tricky too.

Breakfast is the most important meal of the day - especially when it's trying to kill you.

Toast Time: Smash Up! forces you and your friends to fling your toasty forms at each other, knocking seven bells of hell out of one another to prove your dominance as the superior bread.

Bad City may not look like much now, but this GTA-inspired MMO is really quite impressive, because it's all running in-browser.

What do you do? We're not sure. Run around, shoot strangers, steal cars, and so on most likely.

Couldn't find any images for this one, but thanks for taking part in the BIP!
1/14