From the moment it was announced for mobile, I was so excited to play Professor Layton and the Curious Village. Of course, that meant my expectations were high as a kite and after such a positive experience with Layton's Mystery Journey, there was a lot to live up to.

It's safe to say that the game is yet another magnificent entry in mobile and, since the Curious Village is the very first Layton game in the series, it gives me hope that we might see more make their way over.

Saying that, my experience was on an iPad. Had I been playing on iPhone I feel things might have been a little bit different.

Think about the answer

Professor Layton and the Curious Village is a narrative-driven puzzler where good ol' Professor Layton heads off to an isolated village by request of a Baron's widow. She needs his help to find her husband's hidden fortune, a golden apple, but there's far more to the mystery than originally anticipated.

After one of the Baron's relatives is murdered, there's a much larger hunt to go on: one for the killer and one for the inheritance. You meet a curious cast of characters, each with their own puzzles to solve and stories to tell, and have the odd village, St. Mystere, to explore. 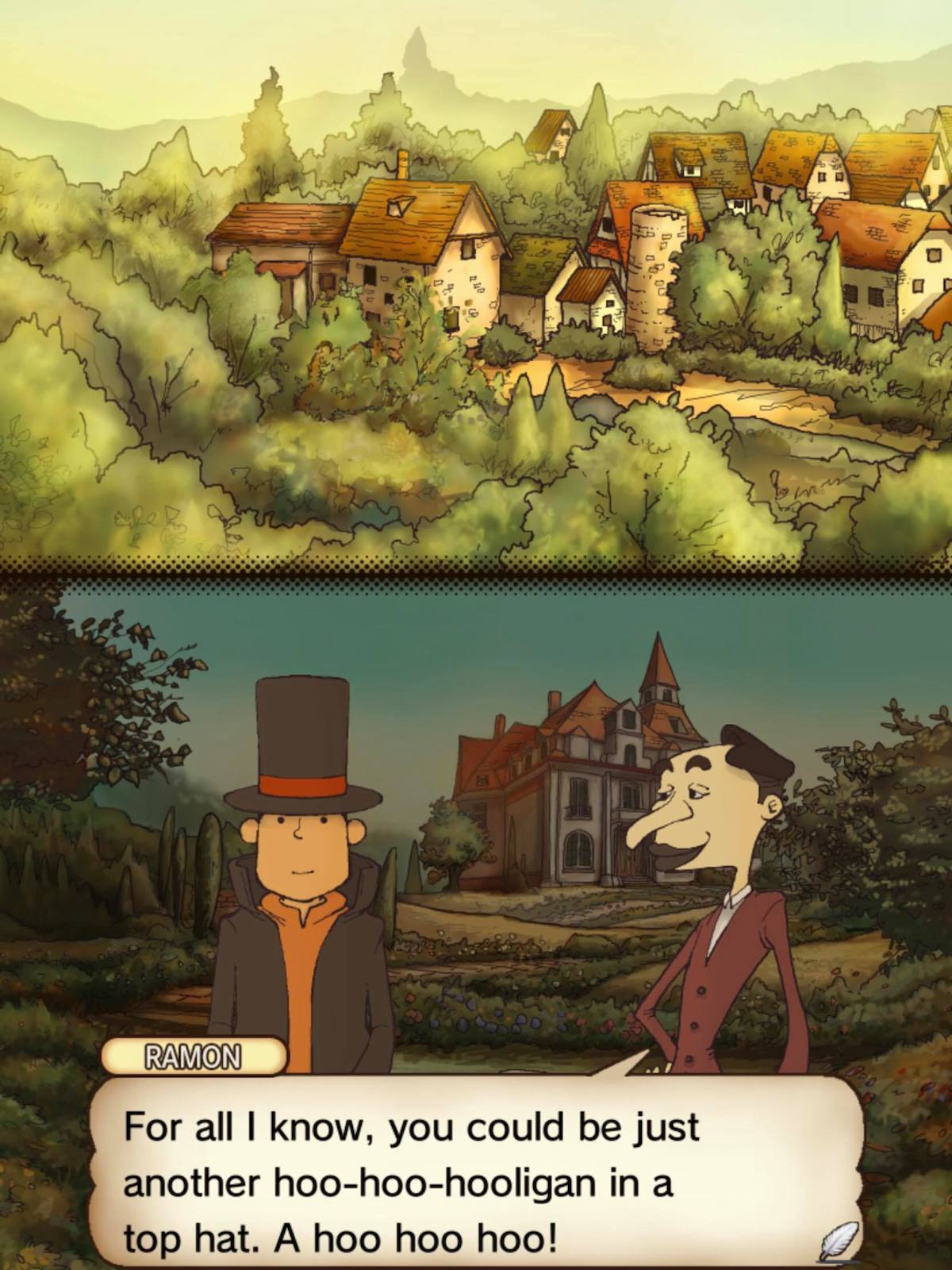 The mobile port has everything its DS version had and then some. With upgraded graphics and a few never-before-seen scenes added in, it's a real delight to play. Its cutscenes make you smile as does the majority of interactions, despite Luke's awful English accent and the Professor's occasionally sociopathic facial expressions.

Alright, fine, that was mean, but it's hard to point out negative things here. Its puzzles are the exact same you'd find in the 3DS version, so if you've played the game recently you might not enjoy it as much.

Since I never got to play it, the puzzles were more challenging to me than I'm proud to let on. Faced with a variety of difficulties, even the easiest level puzzles could be worded in a way to baffle you.

That's what makes the game rather good, though. The majority of puzzles aren't an 'x + y = z'-sort. They're riddles in themselves and make you consider everything with a lot more care and attention.

Read between the lines

If you do get stuck, you can use Hint Coins which you pick up around the village by clicking around everyday objects. There are a total of three hints you can get in most puzzles, the last of which basically tells you the answer.

Besides progressing the story, there are other things to consider too. Each time you solve a puzzle or explore you might get a Gizmo for your mystery creation, painting scrap to match up, or piece of furniture to decorate Luke and the Prof's rooms. 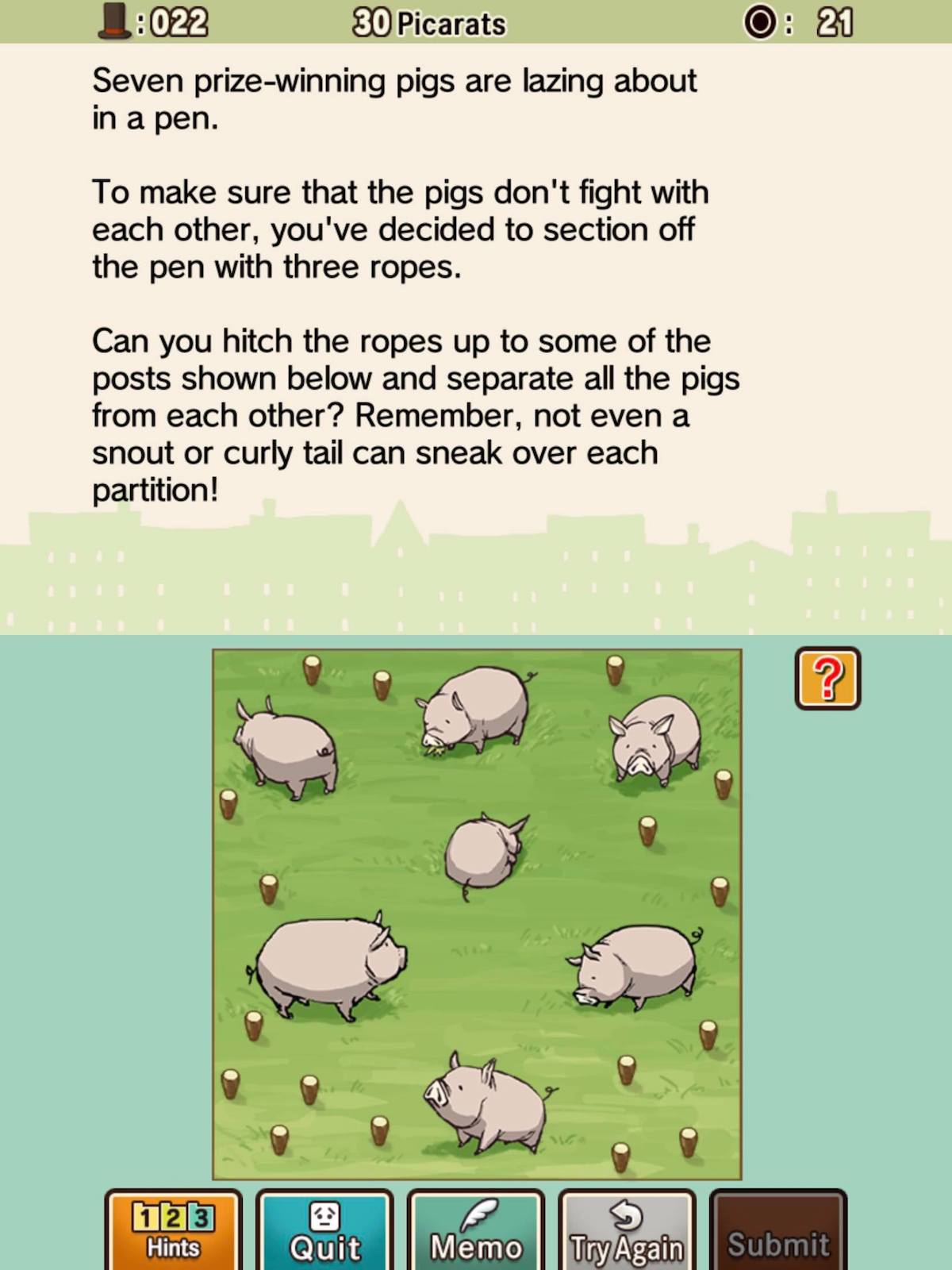 The game's only negatives are the erratic nature of some of the puzzles asked and the ease of use on a smaller device.

Since the challenges require you to draw circles around answers, move pieces about, or pick the correct choice, on a smaller screen it might be a bit finicky to click the right area, especially if you've larger hands.

For me everything worked brilliantly and iPad is without a doubt the best way to play. Though it may be a bit tricky at times, there's no time limit to force you into hasty decisions and you can always rope a pal in to help you out.

Professor Layton and the Curious Village is, simply put, a must for fans of 2D point-and-click puzzlers, even if you played it ten years ago.

Want more? Check out our growing collection of Professor Layton and the Curious Village articles!

Professor Layton and the Curious Village