Switch owners have been rather spoiled for brilliant indie action-adventures with crunchy combat of late.

Now there's another to add to the list in Hyper Light Drifter.

It's got a little of Enter The Gungeon's balletic top-down shooting, a smidgen of of Hollow Knight's weighty swordplay, and a light-footed ninja protagonist worthy of Dead Cells.

To call Hyper Light Drifter derivative would be to do it a grave disservice though. And not just because it predates all of those aforementioned games.

Heart Machine's game is a brilliantly self-contained experience, and one that seems to play by its own rules. That said, at least a few of them seem to have been borrowed and repurposed from the early Zelda playbook. 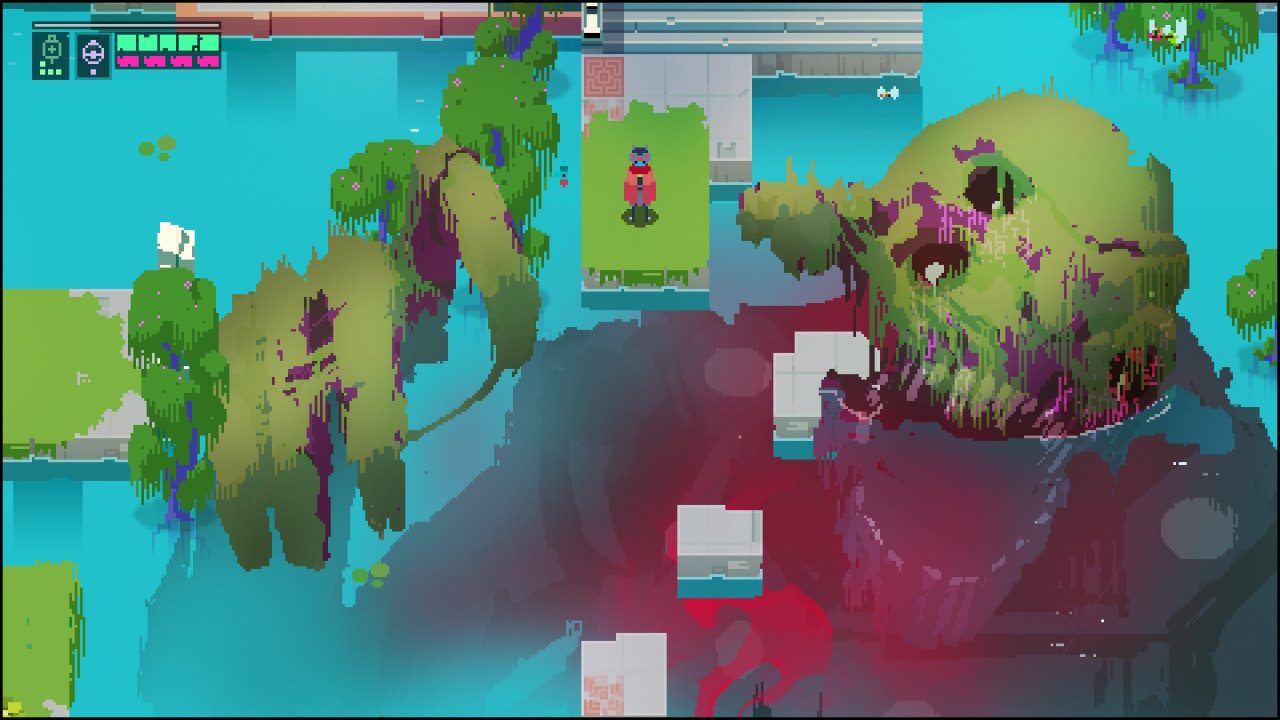 This is a top-down action-RPG with four sprawling dungeons, which can be tackled in more or less any order. There's a semi-open world to explore, bosses to fight, weapon upgrades to be obtained, simple lock-and-key puzzles to negotiate, and stacks of secrets to discover.

Indeed, the world of Hyper Light Drifter itself is one big enigma you'll long to crack.

A whole new world (don't you dare close your eyes)

Hyper Light Drifter is a triumph of world creation as much as anything else. Its devastated fantasy world is rendered with a striking neon palette and accompanied by a hauntingly beautiful synth soundtrack.

In a world filled with tales of loss, hardship and heroism, however, there isn't a single piece of written text to be found. Everything is communicated by way of symbols and pictographs, whether it's the lamentations of a downtrodden NPC or a simple tutorial for a new special move. 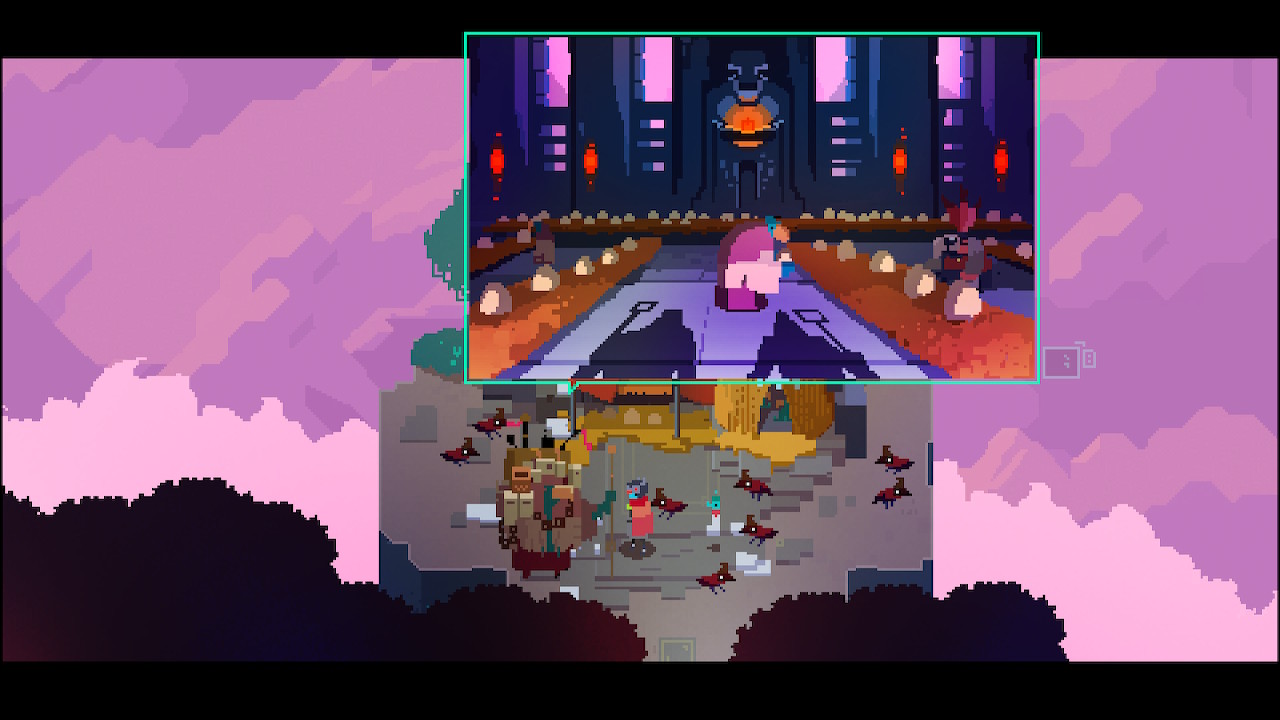 This can actually prove to be quite an obstacle to progress early on in the game. You'll need to stick with Hyper Light Drifter during its opening stretch, as there's precious little hand-holding to be found.

That extends to the hostile encounters that make up so much of the game. Despite the adventurous setting, this is seriously combat-heavy stuff - and that combat exhibits a deadly-sharp edge.

Making progress through Hyper Light Drifter is all about mastering its precarious scraps. Your sickly protagonist can only take a few hits at the outset, and even the lowliest of grunts comes at you hard and fast.

When these enemies start stacking up in threes and sixes, you'll find that button mashing simply won't cut it. It's imperative that you master the game's dash move, mapped to the B button, which is also essential for negotiating the crumbling overworld. 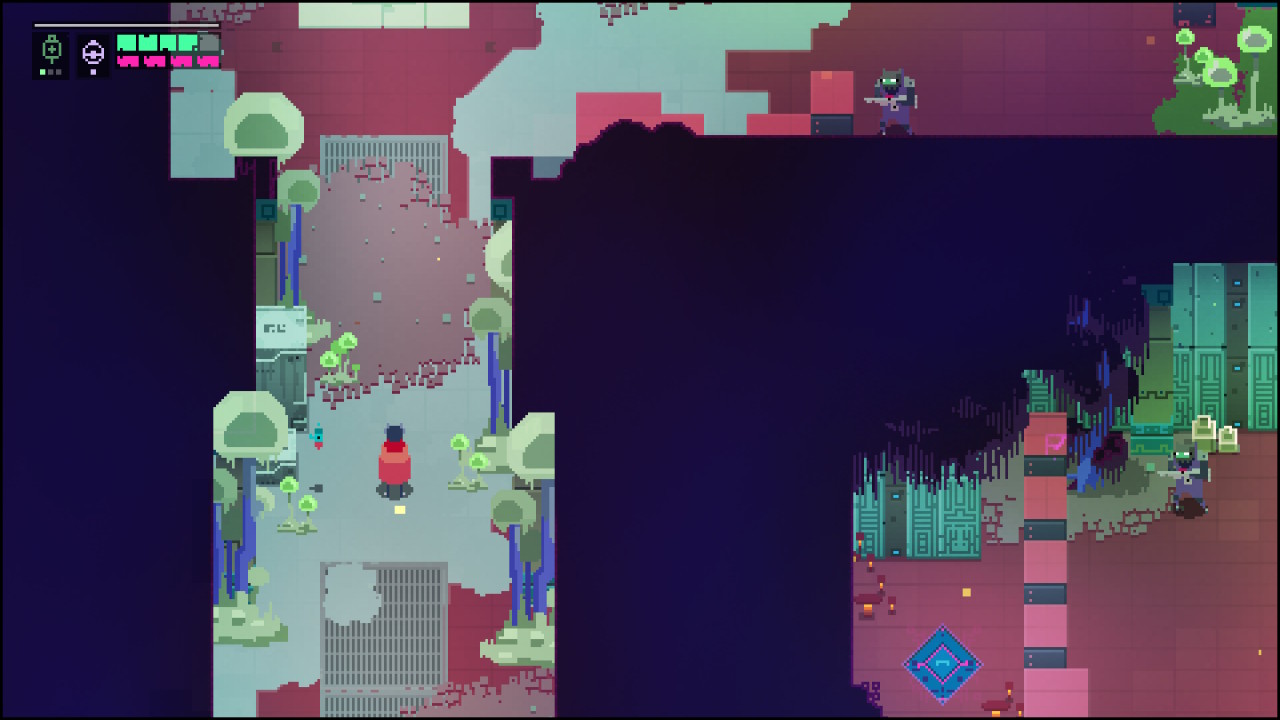 Your sword is your main wrecking instrument here, but it's also the way in which you recoup ammunition for your punchy armoury of guns.

Mastering the game's firearms is a tricky but rewarding exercise in itself. Fine-aiming with the ZL button is very tricky in the middle of a scrap - particularly as it renders you temporarily immobile.

Hyper Light Drifter is a punishing, awkward game to master, but that shouldn't put you off. This is no perma-death roguelike experience like Enter The Gungeon or Dead Cells.

If you die - WHEN you die - you'll simply return to the beginning of the current section, which tends to not be too big a setback. The fact that the world is carefully hand-crafted and can be tackled in a variety of ways also helps mitigate the challenge. You'll get better and better at surviving this world, just as your mysterious character does.

Ultimately, though, what will keep you coming back to Hyper Light Drifter even when it kicks you in the backside repeatedly is its beautifully rendered world. How could you possibly give up when there's likely to be another breath-taking pixel-art vista around the corner?

Hyper Light Drifter is a neon-soaked, hyper-kinetic fever dream of an action-RPG with one of the most alluring game worlds of its kind
By Jon Mundy
| Sep 10, 2018 |
Switch
Find out more about Hyper Light Drifter
SEE COMMENTS

Merge Plane - 5 games to play next

Phantomgate and Spellsouls: two of the best mobile games you never played

Hyper Light Drifter is dashing onto Switch on September 6th