Forget Angry Birds, these are The Original Mobile Games

Columnist Susan Arendt takes a trip to the museum

Welcome to Susan Arendt's latest column on Pocket Gamer. In 2018 we've recruited the best writers and most experienced gamers in the industry and asked them to inspire us. Today Susan takes a look at The Original Mobile Games, a collection of weird and wonderful titles that belong in a museum...

The need for play is a universal truth, and the ways we find to amuse ourselves are as much a statement of personal expression as they are fascinating windows into a specific time and place.

The Strong National Museum of Play is working to showcase the vital role that toys and games play in our everyday lives and currently has more than 480,000 historical objects related to play - toys, games, instruction manuals, design docs, and more - within its walls. If you can't make the trek to New York (though you should try), you can at least sample some of the Strong's preservation efforts by picking up The Original Mobile Games, a collection of handheld games from the early 20th century. 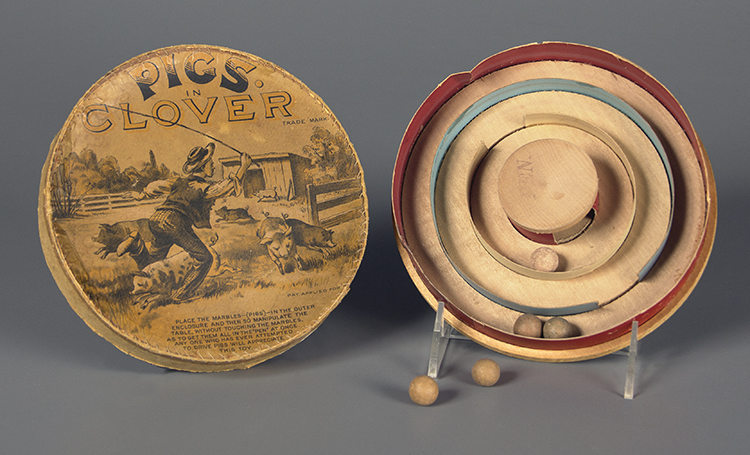 The collection of roll-the-marble-into-the-hole games (called "dexterity" games) is grouped into different categories, like "Meltdown" or "Critters," which is as good a way as any to divvy them up. While they're all fascinating glimpses of American and British culture, the Politics pack is perhaps the most intriguing of all. Your goal in Blackout is to "blackout all the lights in time to save this town" during an air raid, while Keep 'em Rolling for Victory urges you to help keep the trains running on time during the war.

Each of the games featured in the compilation comes with a brief description about its history or inspiration, which sometimes is nothing more than wanting to make a quick buck. Queen Mary, for example, was R. Journet taking advantage of the name recognition the ship (not the monarch) had amongst the hoi polloi.

Construction on the Queen Mary began in 1930 but stalled due to the Great Depression. It was launched in 1934 to great fanfare; the game of the same name came out the same year and was manufactured until 1970. There might even be a copy kicking around your gran's attic somewhere.

Then there's Niagara, originally published around 1927 or so. The puzzle itself is nothing that remarkable - try to get the balls into the barrel going over the falls - but what's of special interest is that during World War II, copies of Niagara were fitted with a small hacksaw blade and a teeny weeny compass. The idea was to mail these special versions to British prisoners of war to help them escape.

Game designers in the 19th century had the same problem as devs today, where copycats would try to horn in on their success by making a game similar enough to be confused for the original. Pigs in Clover was a monster hit of a game, and until Charles Crandall finally managed to have it patented, plenty of other designers took a stab at cashing in on his popularity, oftentimes putting "Pig" in the title of their game just to make sure the customer made the mental connection. You can sample both Pigs in Clover and Greased Pigs to decide for yourself which is better.

Isn't that cool? Learning stuff about gaming history is rad, and The Original Mobile Games is a pint-sized lesson plan that also happens to be a lot of fun to play. Those dexterity games are no joke, especially the ones in the Meltdown pack.

The original games had all sorts of tricks, like beveled edges, or ball bearings under the surface, or magnets to up the difficulty, and TOMG does an admirable job of mimicking the physics you'd encounter with the real-world versions on display. I think you'll be pleasantly surprised how sorely these hundred-year-old games test your skills.

The first bundle of games in the collection is free, and you can pick up other bundles a la carte for a buck or two. Throw The Strong a buck or two, yeah? They're doing important work preserving our gaming history.

Read more of Susan Arendt's columns on Pocket Gamer, and find out more about The Original Mobile Games at the game's official site. If you're looking for more columns, then check out Harry Slater and Jon Jordan, who are always on-hand with sharp, tasty opinions too.
SEE COMMENTS